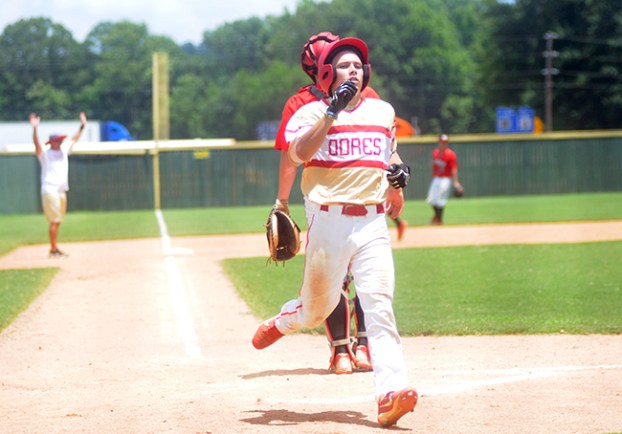 Lafayette High’s Braxton McCord scores in the bottom of the fifth inning during a second round game of the NEMCABB tournament at BNA Park in New Albany, Miss. on Tuesday, June 26, 2018. Corinth won 6-5 in 6 innings. (Jake Thompson)

Lafayette’s season comes to a close after NEMCABB elimination

NEW ALBANY — The summer season came to an end for Lafayette on Tuesday.

The Commodores rallied from three runs down but fell to Corinth 6-5 in six innings in the second round of the Northeast Mississippi Coaches Association for Better Baseball (NEMCABB) tournament at New Albany’s BNA Park.

Corinth advanced to the quarterfinal round to face New Hope later in the afternoon while the Commodores were eliminated from the tournament.

“We had opportunities to really blow that thing open,” Lafayette coach John Walker said. “Lots of called third strikeouts with guys in scoring position and you can’t do that. Big story of that game was with two outs (Corinth) did damage and with two outs we didn’t”

Lafayette struck first with a run in the bottom of the first for a quick 1-0 lead. From there, the Commodores and Corinth traded runs in the second with Lafayette maintaining a 1-run lead.

The Commodores could have cushioned their lead more but a play at the plate gunned down D.B. Bennett and Foster Westbrook to erase two runs. A ball got to the left-center wall after looking like the left fielder might make a casual out. Bennett was hesitant and tagged up before running while Westbrook never stopped running from first, allowing them to be right behind each other for Corinth catcher Will Verdung to make the back-to-back tags.

“We’re going to go on (that fly ball) ninety percent of the time,” Walker said. “The left fielder to me and to (Bennett) looked like he was under the ball, maybe from the angle we had where he stopped and squared up the ball. …(Westbrook) is doing what he’s taught to do from first and they get to third base at the same time and the ball not quite to the cut (off man). I’m going to challenge him to make that throw every time and he did.”

The third inning is where the game began to unravel when Corinth scored four runs, taking advantage of Lafayette starting pitcher Luke Phillips losing his command and grabbing a 5-2 lead. The Commodores responded in their final at bat, scoring three runs in the bottom of the fifth inning to force extra innings.

In the top of the sixth Corinth scored the last run they would need off a Commodore throwing error to first base, allowing Tripp Doran to score from third.

“I liked the way we fought. I liked the way we got back in it, but that doesn’t satisfy our need to win some ballgames,” Walker said. “You come into this thing with the intent to win it and it hurts when you don’t.”

The book is closed on Lafayette’s summer season, having played over 20 games combined between the junior varsity and varsity squads. The Commodores held double headers every Tuesday and Thursday night from May 31 all through the month of June.

The month of games allowed Walker to get a look at some of his younger players who took advantage of playing time that became available with older starters missed games throughout June.

“We had some guys with a lot of opportunity to gets some work with a lot of guys that, in our mind, are penciled in as starters missing quite a few ball games this summer,” Walker said. “We didn’t’ play a single game with close to what we think our most competitive lineup will be. So it gave some other guys a chance to maybe change some minds and we had some guys who did that.”

Oxford, Water Valley better each other with joint summer 7 on 7 workouts

The month of June has become a third season for many high school sports. With practices and a limited amount... read more