Cutcliffe: Pressbox repairs ‘on schedule’ to be done by jamboree 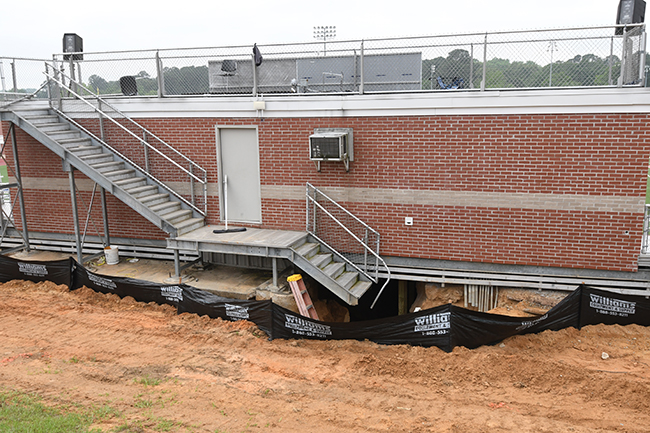 A sinkhole is underneath the press box at Bobby Holcomb Field on May 21, 2018. Repairs to the hole and the pressbox are nearing completely three months after the damage was discovered.

Bobby Holcomb Field will be whole by the time football season rolls around. The repairs to the pressbox and the sinkhole that formed under it last Spring have been underway all summer.

“Everything is on schedule to be done for our fall jamboree,” Oxford head coach Chris Cutcliffe told the EAGLE.

The sinkhole, which was first discovered in late April, caused foundation damage to Oxford’s pressbox as well as the ground under the center portion of the bleachers.

The pressbox had to be re-centered after shifting and repairs to a spring wash were some of the major issues addressed. The Oxford Board of Trustees approved a resolution to be passed during their regular May meeting.

Three months since the initial report of damage,repairs to the pressbox as well as the bleachers are nearing completion.

“Things have gone very well (with the repairs),”  Cutcliffe said. “It could have been much worse, for sure. They were able to raise everything, save the pressbox and save the stands. That was a big deal to not have to go in and completely replace any of those things, which would have made the timeline much more difficult. It’s kind of worked out so far about as best as it could have.”

Oxford will hold their annual football jamboree on Aug. 10-11, hosting a total of 10 other teams over two days. The Chargers will play Charleston in the final game of the day on Aug. 10. Kickoff will be at 8 p.m.

Lafayette’s Eric Jeffries finds yoga on path back to…