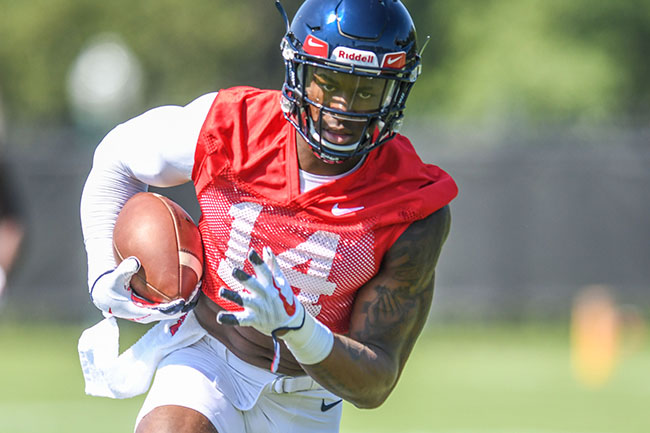 He said he’s only added five pounds to the 225 pounds he played at last season, but a picture of Metcalf at the Manning Passing Academy earlier this summer caught the attention of fans and observers alike. Fellow receiver A.J. Brown, quarterback Jordan Ta’amu and former Ole Miss All-American and New York Giants quarterback Eli Manning were among those also in the photo, but the filled-out Metcalf, with bulging biceps and forearms accompanying his 6-foot-4 frame, dwarfed them all.

The photo quickly made the rounds on social media with comments that Metcalf could easily pass for a linebacker or defensive end, which drew a chuckle from the Rebels’ wideout.

“I didn’t really know it would go viral like that,” Metcalf said. “I really didn’t notice that I’ve gotten that much bigger until somebody pointed it out. I’ve just been working out, grinding and doing the normal workouts every day.

“It was funny, but I really don’t read too much into that.”

Pushing his current height even before his senior year at nearby Oxford High, size has always defined Metcalf’s game. He was used mainly as a red-zone target during his freshman season at Ole Miss with his only two catches going for short touchdowns before a broken bone in his foot sidelined him after two games.

DK Metcalf has the skills and/or frame to play receiver, tight end, defensive end, linebacker, safety, and running back. And if Matt Luke has any gumption he’ll do that just for the hell of it. https://t.co/IMZu6Pgmt7

Metcalf broke into the starting lineup last season and began to show his versatility, catching 646 yards worth of passes and seven touchdowns for the SEC’s top passing offense. That included some highlight-reel plays that displayed his freakish athleticism (the game-winning jump ball at Kentucky and a one-handed catch against Vanderbilt in which he pinned the ball against the defender), but there were others in which Metcalf used his strength and the kind of speed that’s rare for a 230-pounder to create separation and run away from defenders (three of his touchdowns covered 58 yards or more).

Having a size advantage over most defensive backs he lines up against helps, but Metcalf talked in the spring about working to improve his technique getting off the ball and once in his route. He reiterated the objective is to become a well-rounded receiver.

“Everybody knows I can get the jump ball, but can I break a curl down three steps, break a defender off or take a slant 40 yards?” said Metcalf, who averaged 16.6 yards a catch last season. “Just little things like that.”

Metcalf is a part of arguably the SEC’s top receiving corps along with Brown and senior DaMarkus Lodge, both of whom the Rebels are likely to lose after this season given Brown’s profile as a projected first-round draft pick. A draft-eligible sophomore, Metcalf could also have a decision to make about his future with another productive season, though he said he doesn’t think too much about it.

A shot at the next level will come sooner or later. For now, Metcalf is focused on proving that he’s more than just a big body.

“I don’t really pay attention to what other people have to say,” Metcalf said. “At the end of the day, I know me. I know what I can do. I just have to show it.”

How confident is Ole Miss’ defense at the start…