Which freshman offensive lineman is pushing for a starting spot at Ole Miss? 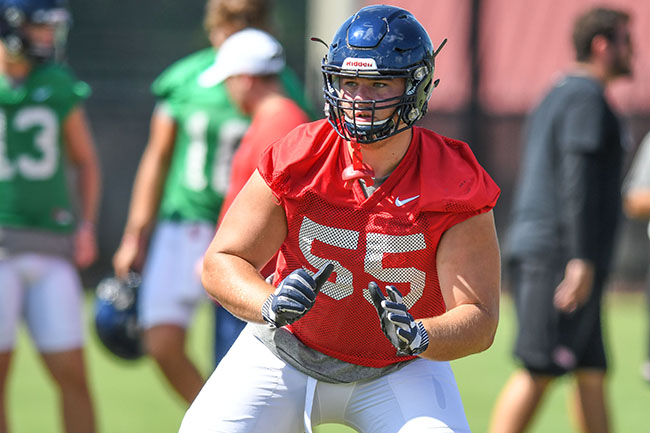 Cracking the starting lineup as a freshman on the offensive line is one of college football’s more difficult tasks, particularly when the competition includes incumbents at every position.

But one of Ole Miss’ youngsters is squarely in the mix.

Redshirt freshman Ben Brown is listed alongside Jordan Sims at right guard on the depth chart, a competition on paper that coach Matt Luke confirmed will continue on the field throughout preseason camp. Sims took the first-team reps Friday during the only practice that’s been open to the media so far as one of five starters back on the line from last season.

Center Sean Rawlings, left guard Javon Patterson, right tackle Alex Givens and left tackle Greg Little are entrenched at their spots. So what is it about Brown’s game that’s allowing him to go toe-to-toe with a senior that’s played in 35 games with 18 career starts?

A little bit of everything.

A consensus three-star prospect during the 2017 recruiting cycle, Brown signed with Ole Miss amid little fanfare coming out of St. Aloysius, a private Catholic school in Vicksburg. But Brown has impressed since arriving on campus with teammates and coaches praising the 6-foot-5, 300-pounder’s advanced cerebral approach to the game along with his technique and physicality.

Defensive tackle Josiah Coatney, who often goes up against Brown in practice, took his praise a bit further, calling Brown the most difficult of any of the Rebels’ offensive linemen to get around.

“Probably a lot of people don’t know about him,” Coatney said. “He’s a freshman, but he’s going to be a great offensive lineman. … He’s one of the better guys I’ve ever played against.”

Brown is vying to become the first freshman offensive lineman at Ole Miss to start a season opener since Rawlings did it at tackle in 2015. Even if that doesn’t happen, Brown’s presence leaves Luke confident at the position should Sims ever need to slide over to center, a position he’s split time at throughout his career.

Sophomores Royce Newman and Bryce Mathews will also contribute up front this season while backup tackle Tony Gray, another member of the 2017 recruiting class, is in the mix to be part of the rotation, but Brown is ahead of the class.

“I’m glad we were able to redshirt him,” Luke said. “He’s got four years left, and he’s going to have a bright future.”