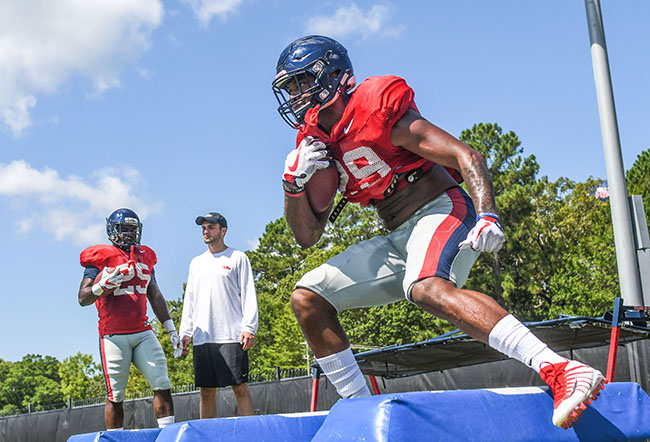 The practice was open to the media. Here are some notes and observations from the Rebels’ fifth practice of preseason camp.

• A.J. Brown and Javien Hamilton were held out for the majority of practice with hamstring injuries. Both were dressed out but spent most of the time watching from the sideline.

Hamilton has been running with the second team at cornerback, though head coach Matt Luke didn’t express concern about either injury. Brown’s injury is “nothing serious,” Luke said afterward. Brown can’t run at full speed, so he’s being limited more as a precaution.

Senior Floyd Allen repped with the first-team offense in the slot in Brown’s absence.

• Ole Miss is still rotating a lot of bodies early in camp to get lots of players reps, but redshirt freshman Ben Brown continues to make a real push at right guard. Brown took all of the reps with the first team there ahead of Jordan Sims, who was working with the second-team offense at center.

• Nose tackle Ross Donelly ran with the first-team defensive line along with ends Victor Evans and Ryder Anderson and defensive tackle Josiah Coatney. Benito Jones repped with the second team, though the switch had more to with the heavy rotations going on at various positions rather than one being ahead of the other in the competition.

The same goes for the Star position (linebacker/safety hybrid), where junior Montrell Custis got the first-team reps. Junior college transfer Vernon Dasher, who was listed at the top of the depth chart at the start of camp, is also competing there.

• Junior college transfer Scottie Phillips and junior Eric Swinney continued to split the first-team reps at running back. Armani Linton and freshmen Isaiah Woullard and Tylan Knight rotated in behind them.

• Camp isn’t yet a week old, yet Luke is already on the verge of losing his voice. The coach’s words were so raspy that he stopped to apologize for it at one point during interviews with reporters afterward. He said he’s using a combination of lemons, tea and hot salt water as a remedy with nearly three weeks of camp left.

“It comes back about the middle of the day and then I lose it,” he said with a smile. “It’s just a vicious cycle.”

How confident is Ole Miss’ defense at the start…