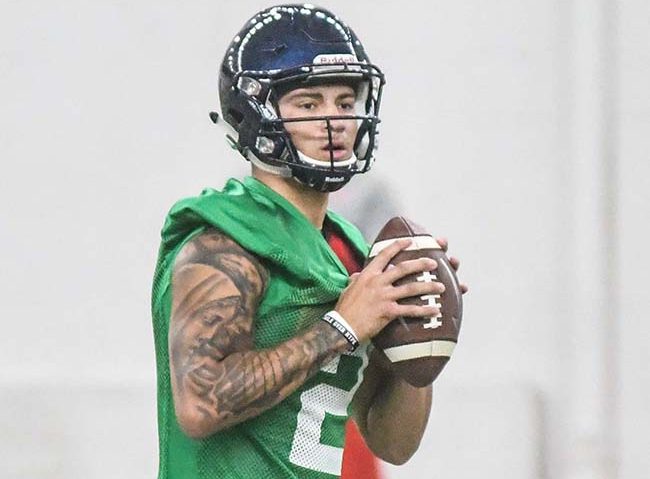 Matt Corral has taken to Mississippi’s slower pace. Now things are starting to slow down for Ole Miss’ quarterback on the field, too.

That’s important considering where the freshman is on the depth chart.

It’s been eight months since Corral made the move to Oxford from southern California after being the highest-rated recruit in the Rebels’ most recent signing class. A consensus four-star recruit ranked as high as the No. 4 pro-style quarterback prospect in the country in the 247Sports.com composite ratings, Corral enrolled early and went through spring drills, which were as much mental as they were physical for the freshman as he tried to absorb as much of coordinator Phil Longo’s offense as he could in three weeks.

Corral learned quickly and impressed enough with his arm talent to end the spring as Jordan Ta’amu’s backup. He’s maintained that spot on the depth chart, a distinction Matt Luke and the rest of the coaching staff feel so strongly about that Alex Faniel, the only other scholarship quarterback on the roster in the spring, has been moved to tight end. Behind Corral are walk-ons Grant Restmeyer and Jacob Cendoya.

Going through the spring sped up Corral’s learning curve while workouts and daily throwing sessions this summer helped him further build chemistry with the Rebels’ receivers. Being the backup has Corral an injury away from being the guy behind center, so how much of the offense could he run at this point if that were to happen?

Executing plays against air is one thing. Knowing where to go with the ball under pressure is another that comes with experience, and that’s where Corral knows he still has to improve in case his number is called this season.

“If you were to put (the offense) up on a board, I know it like the back of my hand,” Corral said. “It’s just repetition and going through it every day. … It’s another thing going through the progression and actually doing it with defenders and a line in your face. That’s where I am, and that’s where I need to get better.”

Watching from the sideline isn’t something the former prep star is used to. Corral started for two different schools during his high school career — Oaks Christian and then Long Beach Poly — and was committed to Southern Cal and Florida during a high-profile recruitment before flipping to Ole Miss in December.

But the 6-foot-1, 205-pounder is doing what he can to stay ready in case he’s needed when the Rebels open the season Sept. 1 against Texas Tech in Houston. Being genuinely comfortable in the offense for the first time is helping with that.

“I think it’s less thinking and more of just not even thinking and reacting,” Corral said. “I think the less thinking I do, the faster it will be. And that’s exactly what Longo wants. As soon as I can get to that point to where I just react, I think that’s when I’ll be there.”

As for the comfort level with his new surroundings, Corral said he’s already fully there.

“It’s my home now. It seems like I haven’t been home to California in forever,” Corral said. “I love it, I’m comfortable, and there’s no complaining on my part.”