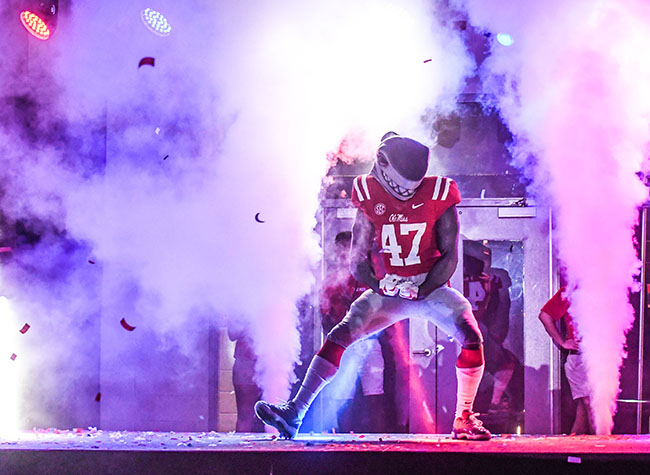 The University of Mississippi's new mascot Tony the Landshark makes his debut at the "Meet the Rebels" fan day at the Manning Center in Oxford, Miss. on Saturday, August 11, 2018. Fans were also able to get autographs from Rebel football, soccer, volleyball, rifle and spirit squads during the event. (Bruce Newman, Oxford Eagle via AP)

What started as a nickname in 2008 has turned into Ole Miss’ mascot.

On Saturday, during Ole Miss’ annual ‘Meet the Rebels’ event, the athletic department debuted Tony the Landshark as the newest on-field mascot. Tony replaces Rebel the Black Bear, who was Ole Miss’ mascot from 2011 to 2017.

Last Sept. Ole Miss’ Associated Student Body proposed the Landshark Referendum, a vote to either keep Rebel or replace him with a new mascot. Rebel was voted out, and the landshark was voted in. After a design process that lasted 11 months, Tony made his entrance to pyrotechnics, smoke, and a light show.

“We knew this mascot was going to need some energy,” Micah Ginn, Ole Miss associate athletic director for sports productions and creative services said. “It was a lot of fun. The deck of cards you’re dealt when you’ve got this incredible personality that’s already really there in the fan base. It’s all out there, and now we get to bring into a mascot form.”

The landshark’s moniker – Tony – is in honor of former Ole Miss football player Tony Fein. Fein, who lettered for the Rebels in 2007 and 2008, first threw up the hand sign after sacking then-quarterback Jevan Snead during practice. After Fein used the fin gesture during a game, the ‘Fins up’ motto was born and weaved its way into Ole Miss culture.

“When all this came about, we said we were going to do this the right way,” Ole Miss vice chancellor for intercollegiate athletics Ross Bjork said. “The story of Tony, it had to be told. It’s so magical. He’s the one who created the whole phenomenon. …I’m not sure there’s a more unique story for a mascot in college sports. You think about how it was born, sort of organically. Now, what’s a landshark? Well, now we sort of created it.”

The development process of the new landshark mascot was not a task taken lightly by Ginn and his staff who sought help from outsides resources, including a company out of Hattiesburg called Rare Design. Rare is a branding and logo company that has experience with professional sports teams, including the Memphis Grizzlies.

Once a decision was made on Tony’s look, Ole Miss reached out to Nascent Perspective Studios, a movie prop company based out of Glendale, Cali., to help with the creation of the mascot costume, particularly Tony’s head. Nascent has worked on such films as “Iron Man,” “Batman” and “Alien vs. Predator.”

“When you’re really close to it sometimes it’s hard to see the forest from the trees,” Ginn said. “Rare (Design) came in and gave us such an awesome perspective on it. …then, you have these professionals who bring visions to life in the physical presence. They were so detailed in the number of teeth. Because the number of teeth, fewer or lesser, would make him too scary or not scary enough.”

With the Rebels’ ready to go, it was time to find the proper way to introduce Tony to the fans. Given the polarizing debate within the Ole Miss fanbase over mascots, finding the balance in unveiling Tony was key.

“We’re an extremely passionate fan base and always have been,” Ginn said. “We’d been working on it for so long that you kind of forget at some point you have to show everybody. I think about a month ago we started thinking about ‘how are we going to roll out the red carpet?’ Until he was done we couldn’t really develop that plan. But we knew we were going to do it at Meet the Rebels. For the kids, it was an incredible show.”

In the upcoming school year, Tony will also make appearances at other Ole Miss athletic venues and sporting events. Ginn already has plans in place for him to be seen at The Pavilion, Oxford-University Stadium and other athletic facilities around campus and is currently working on proper uniforms for each specific sport.

Lafayette, Oxford start season off with pair of jamboree…