Judge Henry Lackey passes away at 83 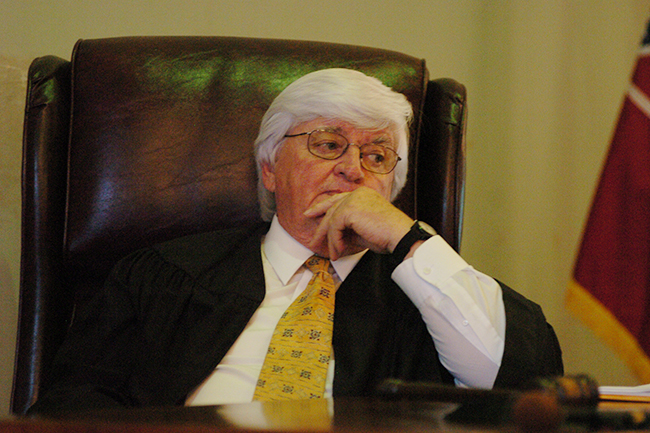 Lackey served for 17 years as Circuit Judge of the Third Judicial District. He served on the Judicial Disciplinary Commission on Judicial Performance for six years, and was chairman at the time he retired in December 2010.

He left his mark on the judiciary with an unwavering commitment to judicial integrity, a statement from the Administrative Office of Courts in Jackson read. In 2008, Lackey famously alerted federal authorities of an attempted bribe and wore a wire in an investigation that rocked the legal community and sent the state’s most famous lawyer, Richard “Dickie” Scruggs, and other high-profile attorneys to prison.

“He was one of the most outstanding jurists in the history of the state,” Mississippi Supreme Court Chief Justice Bill Waller, Jr. said. “His courageous acts in the bribery investigation were done without regard to his health and safety, for the preservation of the integrity of the judiciary. He is one of my heroes.”

Lackey was indignant that anyone would have thought he could be influenced, but he spoke modestly of his role as a judge.

“I just did what so many judges do every day: fulfill their responsibility and their obligation. Public officials are just supposed to do what is right,” Lackey said after the bribery investigation.

Gov. Kirk Fordice appointed Lackey to the Third Circuit District of Benton, Calhoun, Chickasaw, Lafayette, Marshall, Tippah and Union counties in 1993. He was elected four times without opposition, and continued his judicial service after he retired from the Circuit Court bench.

Lackey, a Calhoun City native, graduated from Calhoun City High School in 1952 and earned a bachelors degree in business administration from Mississippi College in 1956. He paid a large portion of his tuition by working part-time for Deposit Guaranty National Bank while he was a student, and with his childhood savings. When he was in elementary and high school, he operated the popcorn popper at his father’s Ben Franklin five- and ten-cent store in Calhoun City.

Shortly after earning his undergraduate degree, Lackey went home to run the family business after his father passed away. Several years later, his National Guard unit was activated, and he served in the U.S. Army in 1961 and 1962.

Lackey enrolled in law school immediately after he left the Army, and graduated from the University of Mississippi School of Law in 1966. He was soon elected Calhoun County prosecuting attorney, and served a four-year term before then accepting an appointment for a year as the state’s first public defender.

While still in law school, Judge Noah “Soggy” Sweat oversaw the pilot program at the University of Mississippi School of Law. Lackey and three senior law students represented indigent defendants in the seven counties of the Third Circuit District. The pilot program helped lay the groundwork for the Legislature to give counties authority to designate funds for public defenders.

He returned to private law practice in Calhoun City, and served as board attorney for the Calhoun County Board of Supervisors for eight years. He was also a solo practitioner for 26 years.

Lackey was a member of the Mississippi Bar for almost 52 years, having been admitted to the practice of law on Aug. 21, 1966. He was a former president of the Calhoun County Bar Association and the Third Circuit Bar Association, and was also a fellow of the Mississippi Bar Foundation. He was the recipient of numerous honors and awards. He was the 2008 recipient of the Supreme Court’s Chief Justice Award, and in 2009 he was honored by Mississippi College as Alumnus of the Year. He previously served on the Board of Trustees at Mississippi College.

Lackey is survived by his wife of almost 60 years, retired music teacher Helen Rose James Lackey of Calhoun City, and son Kevin Lackey of Ridgeland, director of the Administrative Office of Courts.

A funeral service will be held Sunday, Aug. 19 at 2 p.m. at First Baptist Church in Calhoun City. Visitation will be 5 to 8 p.m. Saturday, Aug. 18, also at the church. Pryor Funeral Home in Calhoun City is in charge of arrangements.