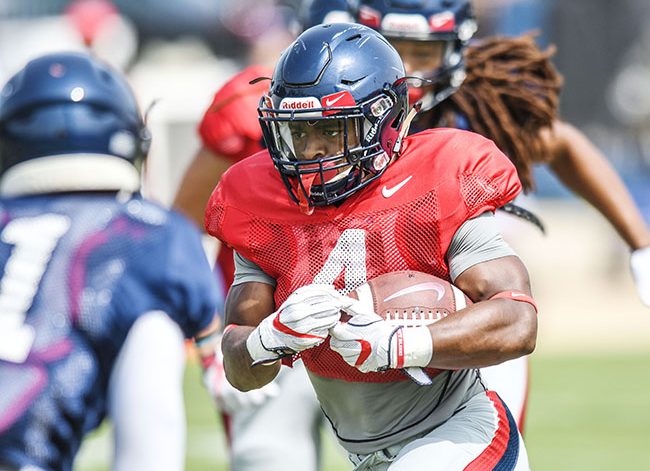 To say Tylan Knight signed with Ole Miss amid little fanfare would be an understatement.

The freshman running back was one of the last players to join the Rebels’ 2018 signing class. In fact, Knight, once committed to Louisiana, wasn’t offered a scholarship until the week before national signing day in February, which was greeted with criticism from some message-board fans who viewed the late offer as a sign that Ole Miss had missed out on other top targets.

But the former two-star recruit is receiving plenty of praise in his first preseason camp.

Knight has turned heads with his athleticism and versatility as he tries to carve out a role this fall. He’s gotten most of his reps with the third team in a backfield that includes junior college transfer Scottie Phillips and junior Eric Swinney while getting looks at returning kicks and punts.

There are questions about his durability given Knight’s size — he’s generously listed at 5-foot-7 and 170 pounds on Ole Miss’ official roster — but that hasn’t been a problem from what coaches and teammates have seen. He reminds running backs coach Derrick Nix of another player he’s tutored that played bigger than his stature.

“Very similar to Jaylen Walton,” Nix said. “Strong guys for their size, guys who don’t need a lot of room to get going and can get to their top speed right away. Just very instinctive. I think that’s the thing that sticks out to me. He can set up blocks and can kind of anticipate where holes may be.

Knight may not be a heavy part of the backfield rotation with Isaiah Woullard, converted safety Armani Linton and senior D.K. Buford also competing for carries. He still has to familiarize himself with the plays and concepts within the offense, but his speed and versatility make for a unique skill set that could be used in certain packages.

It wouldn’t be anything new for Knight, who played nearly every position in his final season at Pearl High. He lined up at quarterback, running back and receiver while recording 117 tackles on defense and serving as the Pirates’ primary kick returner.

The plan, Nix said, was always for Knight to begin his career at running back. Knight has been a natural at catching passes whether it’s been out of the backfield or in the slot and has gotten a long look at punt returner along with fellow freshman Elijah Moore.

“He’s a pace-changer, a scatback,” offensive lineman Greg Little said. “We can throw him the ball. He can kick return and punt return. He’s a player to watch. I think he’s has those Heisman traits where he can do a lot of things great. He’s going to be one of those guys to watch out for for a long time here.”

With a strong first impression, it sounds like coaches, teammates and fans may be watching him on the field sooner rather than later.