Ole Miss’ secondary preparing for life on the island 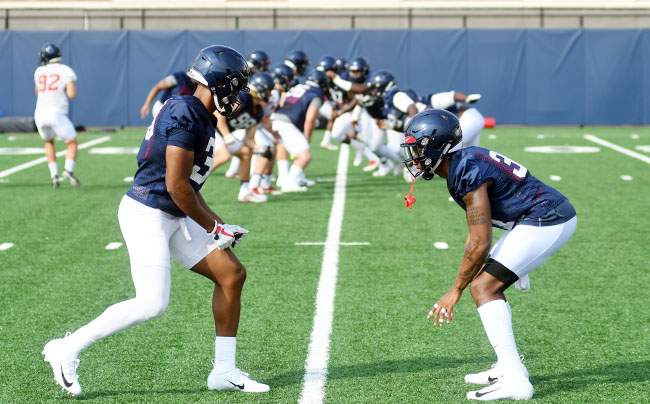 Ole Miss’ plan to improve its most glaring deficiency in recent years involves an aggressive approach up front.

It’s appealing to the back end of the Rebels’ defense.

Ole Miss’ struggles stopping the run have been well-documented for a team that’s finished last and next to last in the SEC’s Western Division the last two seasons, respectively, despite having one of the league’s top offenses during that span. With leading tackler DeMarquis Gates out of eligibility and defensive ends Marquis Haynes and Breeland Speaks off to the NFL, Ole Miss wants to load the box more often this season in an effort to add reinforcements for a run defense that finished 116th out of 129 FBS teams in 2016 before falling to 123rd last season.

Committing more defenders to the line of scrimmage means leaving the secondary on an island in pass coverage, a strategy coach Matt Luke has been hinting at since SEC Media Days. So it’s not one that’s come as a surprise to the group.

“(Defensive coordinator Wesley) McGriff, (cornerbacks) coach (Jason) Jones and (safeties) coach (Charles) Clark have been getting us ready for this since Day 1,” said cornerback Javien Hamilton, whose three interceptions last season tied for the team lead. “Last year, we played a lot of man coverage on the back end. It shouldn’t be a lot of pressure even though (McGriff) is going to load the box a little more to stop the run.”

The approach could backfire if Hamilton and the rest of the defensive backs aren’t able to hold up in one-on-one matchups, but the coaches’ confidence in the group to do just that comes from their combination of experience and depth. Juniors Jaylon Jones and Myles Hartsfield are the top options at cornerback with Hamilton and Ken Webster, both seniors, behind them. Another pair of seniors, Zedrick Woods and C.J. Moore, are manning the safety spots while junior Montrell Custis and junior college transfer Vernon Dasher will rotate at Star (hybrid linebacker/safety).

Those numbers helped Ole Miss get through camp without skipping much of a beat despite some injuries. Hamilton (hamstring) and Dasher (groin) missed part of camp before returning to practice in recent weeks while Webster (hamstring) is still being held out as he tries to heal in time for the Rebels’ opener against Texas Tech in Houston on Sept. 1 (11 a.m., ESPN).

They’re all embracing the alone time McGriff plans to give them on the outside.

“It shows he’s got a lot of trust in us and he believes we can win our one-on-one matchups, and we’ve been trying to show him,” Jaylon Jones said. “It’s just awesome because for a coach to do that, you’ve got to have some faith in your corners to win the one-on-one matchups.”