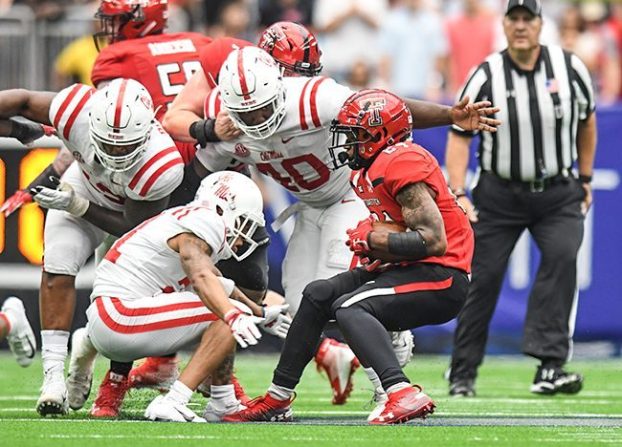 Jaylon Jones ‘tremendous loss for us in more ways than one,’ but Ole Miss confident in secondary’s depth

The fear Ole Miss’ coaches had regarding cornerback Jaylon Jones were confirmed over the weekend.

Jones will miss the rest of the season with a torn ACL, head coach Matt Luke confirmed Monday. Jones left the Rebels’ 47-27 win over Texas Tech on Saturday in the third quarter after crashing to the turf trying to make a tackle. Jones was helped off by trainers before an MRI on Sunday revealed the injury’s extent.

The 5-foot-11, 195-pounder is not only one of the Rebels’ top cover options but has also proven to be a dynamo on kickoff returns. His first crack at it this season went 94 yards for a touchdown Saturday, which helped bump his career average to nearly 27 yards per return.

“That’s a tremendous loss for us in more ways than one,” defensive coordinator Wesley McGriff said.

If there’s a silver lining, Jones’ injury comes at one of the deepest positions on the roster. Seniors Javien Hamilton and Ken Webster, whom Luke said played “exceptionally well” Saturday after dealing with a hamstring injury for most of preseason camp, are the leading candidates to take over as the starter opposite Myles Hartsfield. Junior Jalen Julius and freshman Keidron Smith are also part of the rotation at cornerback.

“I do think we have a lot of people that are capable there,” Luke said.

Luke said Jones’ loss won’t alter the Rebels’ plan to stack the box more often this season and leave the defensive backs on an island in coverage — “I think the guys they go against every day in practice gives you that confidence to be able to do that,” he added — but the secondary is less flexible than it once was.

Having started seven games at safety last season, Jones was the first player McGriff would’ve moved had if an injury thinned Ole Miss out at another position in the secondary. Now his best bet is Hartsfield, who started every game at safety as a freshman in 2016 and took reps at Star (nickel) during preseason camp.

“We’ve got to pick up where he left off at,” McGriff said. “It’s painful, but I know he expects us to go on.”

As for Jones’ role as a returner, Luke said that will be filled primarily by freshman Elijah Moore, who’s also returning punts. Tylan Knight, another freshman, is also an option.

Freshman linebacker Kevontae’ Ruggs and receiver DaMarkus Lodge are going through concussion protocol this week and are questionable for the Rebels’ game against Southern Illinois on Saturday (3 p.m., SEC Network alternate), Luke said.

Ruggs made two tackles before leaving in the first half after a blow to the head. Lodge played most of the game, catching six passes for 96 yards.

Scottie Phillips’ explosive debut is part of a handful of Week 1 performances for Ole Miss that have been recognized... read more