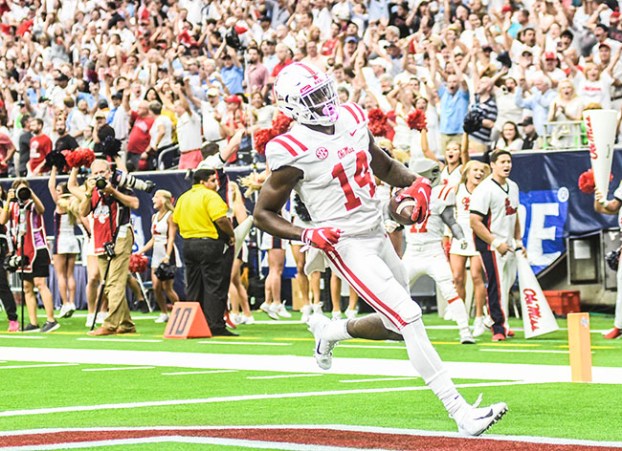 Ole Miss’ offense looked about as expected to start the season.

The Rebels racked up 546 total yards led by a receiving corps that’s long been billed as perhaps the nation’s best. A.J. Brown, DK Metcalf and DaMarkus Lodge combined for 270 receiving yards and a pair of touchdowns, senior quarterback Jordan Ta’amu finished with 336 passing yards, and the SEC’s top passing offense last season picked up right where it left off in the Rebels’ 47-27 win over Texas Tech.

“We do that everyday,” Metcalf said. “It’s a blessing y’all got to see what we do at practice every day.”

It’s the running game that surprised many that got their first glimpse at an offense that finished 11th in the league in rushing a season ago even with 1,000-yard rusher Jordan Wilkins, who’s now with the Indianapolis Colts. Coaches have been high on junior college transfer Scottie Phillips’ one-cut, explosive running style since the spring, and Phillips showed why with a 16-carry, 204-yard debut that included nifty touchdown runs of 38 and 65 yards.

“I’ve expected that since practice,” Ta’amu said. “He’s running like that in practice, and it translated into the game.”

Ole Miss (1-0) will face better defenses than the group at Texas Tech that’s normally among the nation’s worst when it comes to statistics. The Rebels’ talent on that side of the ball is likely to overwhelm Southern Illinois, an FCS opponent, when the Salukis (1-0) make the trip to Vaught-Hemingway Stadium on Saturday (3 p.m., SEC Network alternate) before the real tests begin next week with No. 1 Alabama coming to town for both teams’ SEC opener.

Expecting that kind of consistent explosiveness from the running game once the Rebels start their league gauntlet may be a stretch, but last week was an example of the choice defenses face when Phillips gets going behind a veteran offensive line. Phillips, who also had a 44-yard run, easily broke through the line on his 65-yard scamper midway through the third quarter with Tech largely vacating the box to put extra defenders in coverage, but when the Red Raiders crept closer to the line of scrimmage on Ole Miss’ next possession in what was a two-possession game at the time, Ta’amu went over the top to find Brown for a 34-yard score.

“They tried to change up to stop the run, and A.J. scored on the very next play,” Metcalf said. “It’s a lose-lose situation for the defense.”

Said offensive coordinator Phil Longo, “Really it’s the approach taken by the defense. It doesn’t really dictate what we do but it allows us to attack different areas of the field or different aspects of the defense.”

The long gainers are nice, but both Longo and head coach Matt Luke ultimately want efficiency on the ground. Longo said the objective is to pick up 4 yards on each carry in order to keep the whole playbook open and defenses guessing.

It’s a thought that’s as appealing as it is balanced for an offense that already thinks big.

“The potential is always the roof for us, but for Scottie or any running back to go for 200, it just helps out the passing game tremendously because they can’t drop into coverage every time,” Metcalf said. “They’ve got to respect the run and the pass.”

Braden Thornberry’s final season at Ole Miss begins this weekend. It may surprise some that he has stayed in college... read more