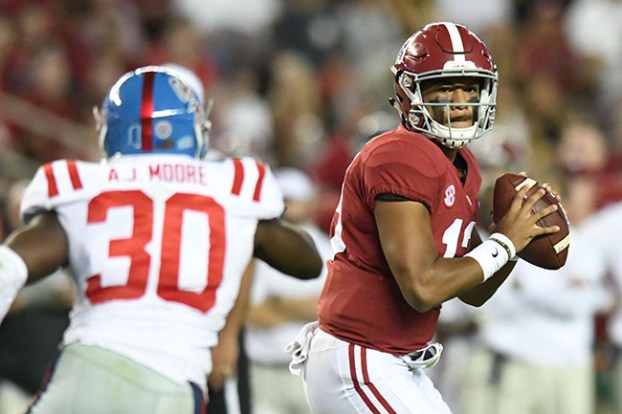 Ole Miss got a small taste of Tua Tagovailoa last year inside Bryant-Denny Stadium. The Rebel defense will get a lot more than a sample on Saturday when No. 1 Alabama comes to town (6 p.m., ESPN).

In the Crimson Tide’s 66-3 win over the Rebels last September, Tagovailoa was 3-of-5 for 51 yards and a touchdown in garbage time. Since then, the sophomore quarterback helped Alabama (2-0) win a national championship with second-half heroics against Georgia last January, insert himself into the starting quarterback job and create a quarterback controversy that is still ongoing.
Ole Miss (2-0) is not facing the same player they did in Tuscaloosa.

“The first thing, you’ve got to account for the quarterback in (Alabama’s) run game,” Ole Miss defensive coordinator Wesley McGriff said of preparing for Tagovailoa. “They have the talent. They can score from any place on the field. The scheme will change a little bit in regards to who’s going to have eyes on the quarterback in the run game.”

Alabama head coach Nick Saban is not shying away from playing both of his quarterbacks.

Tagovailoa and junior Jalen Hurts have both seen the field during the first two games of the season, with Tagovailoa getting the start in each. In both starts, the Hawaiian native has been the most efficient quarterback, achieving the highest rating in the country (98.5).

In Alabama’s season opener against Louisville, Tagovailoa threw for 227 yards and two touchdowns while rotating with Hurts, who threw for only 70 yards.
Tagovailoa seems like the more consistent quarterback of the two, but forcing defenses to prepare for both is one reason Alabama is so dominant.

“The ability for a young quarterback and the decision making, they ask (Tagovailoa) to do some RPO stuff where he has to make some decisions,” Ole Miss head coach Matt Luke said. “He’s got a really quick release. He has very good receivers to throw it to. Then his ability to extend plays. You watch their first touchdown against Louisville, he extended the play and made a play with his feet. He keeps drives going on third down by scrambling out of the pocket. His ability to extend plays, and obviously his decision making, has been good.”

The Rebel defense had trouble slowing down a FCS offense last Saturday, giving up over 600 yards of offense and five touchdowns to Southern Illinois. Alabama’s offense is second in the Southeastern Conference in scoring, averaging 54 points per game. The Tide is fifth in the SEC in total offense with 559 yards per game.

Last Saturday against Arkansas State, the Crimson Tide piled up six touchdowns and 599 yards in their 57-7 win over the Wolfpack.

“Their whole team, they live by one motto and it’s just doing the little things right,” Ole Miss defensive tackle Josiah Coatney said. “(Tagovailoa) is just like every other quarterback they’ve had in the last two to three years, a guy who can throw and a guy who can run. You got to execute your plays and be disciplined. That’s the things we got to do to beat Alabama.”

The arm of Tagovailoa is the not the only weapon he possess.

He has rushed for 46 yards and a touchdown on on nine carries.

Starkville stays atop AP Poll; Water Valley moves up in 3A

There was not much change to the top half of the rankings in this week’s Associated Press Top-10. Starkville (4-0)... read more