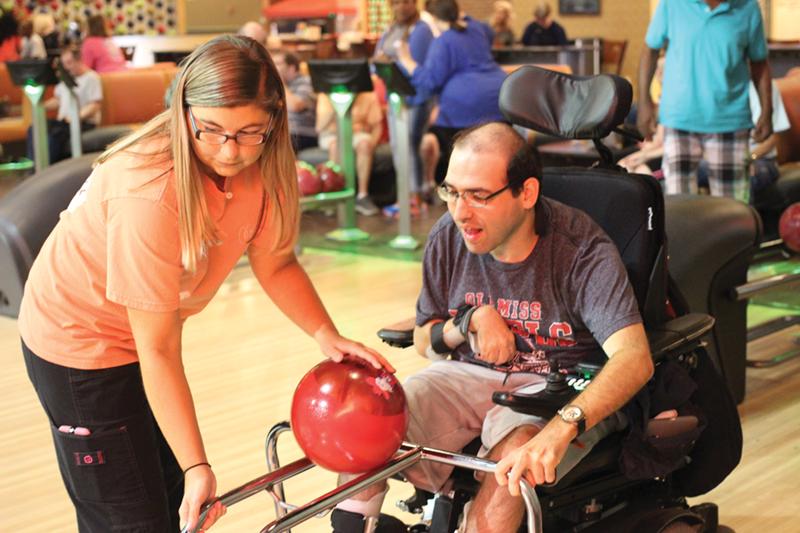 Stuart Risner, right, has been a member of the Let it Roll bowling league for two years. He is assisted by Madeline Moore, Vibes volunteer.

The Let it Roll bowling league launched its third season on Wednesday, with more than 100 special-needs adults and high school students hitting the lanes.

Sponsored by local groups Self-Advocacy for Everyone, North Mississippi Regional Center, Communicare Connections and Vibes, Let it Roll started in 2015 with 50 participants. Today, according to Dawn Dziduch, who founded SAFE with her husband Steve and their daughter Tina, the popularity of the league is beyond what she ever hoped.

One of the best aspects Dziduch said she’s noticed over the years is the chance for special-needs students from Oxford and Lafayette high schools to interact with others just like them.

SAFE’s mission is to help adults with special needs not only gain valuable social interaction, but also, as the name implies, build confidence to make decisions and be their own advocate.

The group began with the “Core Four” – Tina Dziduch, Mason Buckner, Chris Willis and Heather Bouchillon. During one of their monthly meetings, Dawn said the group expressed interest in bowling, so they figured out a way to make it happen.

Let it Roll meets at Premier Lanes in Oxford on the second and fourth Wednesday of every month at 9:30 a.m.

In addition to the league’s meetings, members of the group also compete in Special Olympics. Jerry Winstead comes to Let it Roll with NMRC, and said he’s looking forward to beating his high score this season.

“I’m here with NMRC, but I’ve been with the bowling league for two years now,” Winstead said. “Last year I got a high score of 112, and I bowled a 124 in the Special Olympics. I like bowling with them and I enjoy the things we do together.”

SAFE is also preparing for its second-annual Winter Gala, something both Dziduchs said they were excited for. The group will gather for its regular October meeting for members to discuss what they’d like to see for this year, with a little constructive help. Dziduch said at the moment, SAFE is interested in finding volunteers to donate gently used formal dresses and suits or tuxedos, as well as a volunteer for hair and makeup.