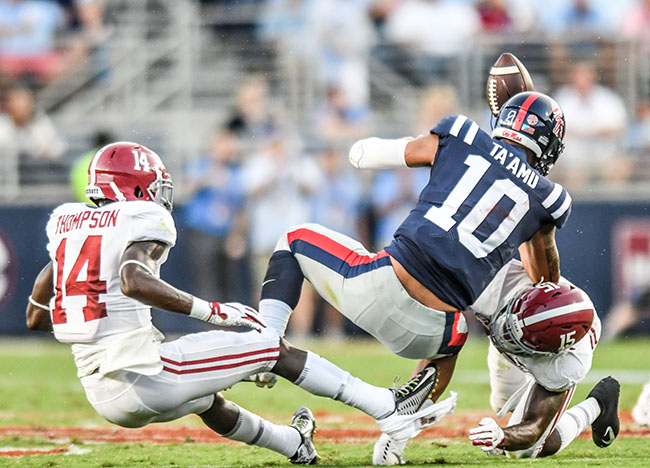 Outmanned and outmatched would be the most succinct way to describe Ole Miss’ performance against Alabama.

The Rebels and their fans had 11 seconds to bask in the possibility of upsetting the nation’s No. 1 team before Alabama got the ball. Three efficient plays later, the Crimson Tide scored on a 43-yard run from Damien Harris that tied the game.

Alabama never looked back after that, mustering a 21-point lead by the end of the first quarter that ballooned to 62-7 when all was said and done.

“I felt like in our performance tonight we got beat soundly in all three phases,” Ole Miss coach Matt Luke said. “Give them a lot of credit. You can’t play the way we played against a really good team.”

So far this season, Ole Miss has relied on the explosive playmaking ability of its offense. Quarterback Jordan Ta’amu and his elite group of wide receivers seem poised to keep the Rebels competitive in many of the games on the schedule.

Alabama wasn’t one of those.

On Saturday, Ole Miss saw very little of the air raid that has them ranked as one of the top scoring offenses in the country.

Instead, Ta’amu was regularly forced to throw under pressure or had passes tipped, and while the senior still made some good plays, Alabama’s young secondary was regularly right beside any receiver and ready to fight for a 50/50 ball.

“I think every player and coach on the team offensively would tell you that (being held to 7 points) was frustrating,” Ole Miss offensive coordinator Phil Longo said. “I think we expected a better performance. … In a game like this where you are playing a team of this caliber, you know you’ve got to play mistake-free football and we didn’t do that.”

Ta’amu finished his night 7 of 22 for 133 yards, including the 75-yard deep ball that opened the game.
It was that sort of night for the Rebels.

It was the sort of night that was unavoidable given the continued stagnant performance by a defense that gave up 516 yards.

Heading into Saturday’s game, Ole Miss ranked 124th out of 129 FBS teams in total defense, giving up an average 557.5 yards per game. If that number isn’t dramatic enough, consider that in the past three games the Rebels have allowed 2,052 total yards.

If that trend continues, it’s hard to imagine Ole Miss winning very many games this season.

Much has been written about concerns regarding roster depth and lack of experience for the Rebel defense, but there is also something to be said for the confusion and misalignment that so frequently appear on defensive plays.

When facing Alabama, the level of playmakers that line the roster cannot be discounted and there is no shame in going up against an opponent that is simply better.

But the Crimson Tide’s shellacking of the Rebels wasn’t just about being outmatched.

Throughout the game, Ole Miss’ offense looked uncomfortable and the defense looked unprepared. Even the defensive highlights – a fumble recovery in the first quarter and an interception in the third, both by C.J. Moore – seemed like miscues by Alabama versus an intentional effort from the Rebels.

“You’ve got to give Alabama credit, they came in and did a tremendous job executing. I thought we had a good plan and we’ve just got to go out and execute that. When you play a good football team (like Alabama), if you make a mistake they are going to capitalize on them, and that’s what happened tonight,” Ole Miss defensive coordinator Wesley McGriff said.

That much is true, as the Tide is one of the best in the country at exploiting an opponent’s mistakes, but what about a team that continually struggles to read offensive plays and, as a result, finds themselves out of position to defend or stop an offense?

Unless Ole Miss’ defense finds a way to get some stops, the Rebels will be in for a long season. As it stands now, the team has one more week to tune up and prepare themselves for the grueling march of an SEC schedule that includes a road trip to LSU and what is likely to be a shootout in Little Rock with Arkansas. Both of those matchups are before Auburn and South Carolina head to Oxford, two games that are certain to expose the defensive weaknesses and potentially provide another lopsided score.

Donica Phifer is Managing Editor of the Oxford Eagle. You can reach her at donica.phifer@oxfordeagle.com.

Ole Miss’ defense not inspiring any confidence with No.…