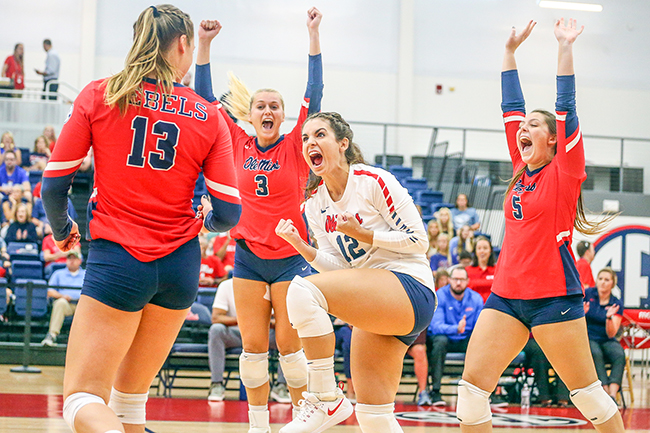 Ole Miss’ Jordan Fate (3), Carolina Adams (12), Nicole Purcell (5) and Emily Stroup (5) celebrate during their match against Samford in the Rebel Invitational on Aug. 31, 2018 at the Gillom Sports Center. (Petre Thomas)

The first three weeks was kind to the Ole Miss volleyball team. Winners of nine out of their first 10 matches, including an eight-match winning streak, saw the Rebels picking up momentum as they inched closer to the start of conference play.

Then a five-set loss to Memphis on Sep. 11 followed by a 1-2 trip to Houston for the Rice Tournament has the Rebels (10-4) searching ahead of their Southeastern Conference opener at No. 11 Florida on Friday. The loss to Memphis ended a 12-match winning streak at home.

“We had a rough week,” Ole Miss head coach Steven McRoberts said. “We came out just a little bit flat (against Memphis). Part of the issues as your building a program and as your team is starting to have some success is sometimes, you get a little comfortable. Our team admitted to that with the preparation. That is something that we as a staff need to do better, I need to do better as a head coach to be a little more on top of us, in those sorts of situations.”

Despite the hiccup, the Rebels are coming off a 3-0 sweep of McNeese State to close out the tournament in Houston last weekend.

Junior Emily Stroup has been the workhorse for the Rebels through the first month of the season. She has recorded 246 kills, ranking second in the country and sits atop the SEC in that category. Stroup is averaging 4.57 kills per set, good enough for second in the conference. She has 62 more kills than the next closest player, Georgia’s T’ara Ceasar.

“Emily Stroup just continues to rack up points for us,” McRoberts said. “She is carrying a huge load for us. We have a few players who are coming along nicely.”

Sophomore Leah Mulkey and senior Caitlin Wernentin have helped Stroup provide the offense. Mukley is second in kills with 134 and Wernentin has 115. They are the only three players on the Rebels’ roster with more than 68 kills.

For the third time since 2015 the Rebels will open conference play against Florida (9-3). It has been a one-sided affair with the Gators leading the overall series 47-6. This will be the first time since 2016 Ole Miss has traveled to the state of Florida.

Last year the Gators came to Oxford and swept the 3-0.

“It is our annual opening match at Florida,” McRoberts said. “It seems like it’s our opening weekend opponent every single year, and we need to learn to start embrace that a little more. We are going to have a lot of good opportunities from that.”