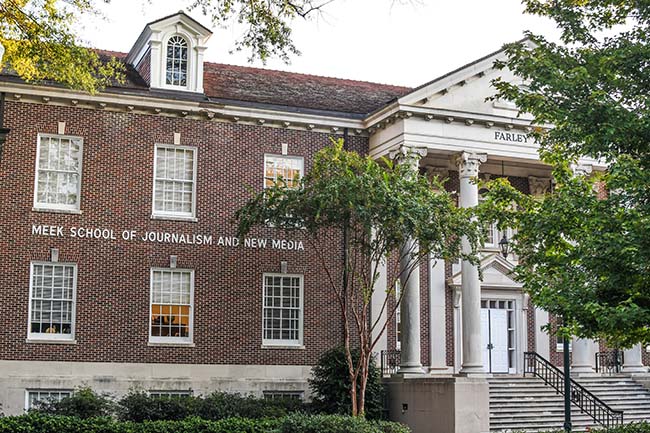 Ed Meek, the author of a controversial Facebook post that has been the subject of much discussion in Oxford and the University of Mississippi community, has requested that his name be removed from the Meek School of Journalism and New Media.

The request from Meek arrived on Saturday evening, one day after the faculty of the journalism school issued a statement calling for Meek to ask that his name be removed.

On Wednesday, Meek had written a now-deleted post on his Facebook page that included two photos of African-American women wearing short dresses, suggesting that such attire is a problem connecting to falling real estate values, declining tax revenue and a 3 percent decrease in enrollment at the University.  The post was quickly condemned by Ole Miss Chancellor Jeffrey Vitter and the Meek School dean Will Norton, Jr., among other members of the school’s faculty.

“Today I have asked the University of Mississippi to remove my name from the School of Journalism and New Media,” Meek said in a statement published to his Facebook page. “This past week I made a post on Facebook that reflected poorly on myself, the School and our University. It was never my intention to cast the problems our community faces as a racial issue. I do not believe that to be the case. I heartily apologize to all I have offended. I particularly apologize to those depicted in the photographs I posted. I was wrong to post them and regret that I did so.”

Meek’s request allows the University to forgo the process that Ole Miss Chancellor Jeffrey Vitter outlined in an open letter to students, faculty and staff on Friday afternoon. The process for “consideration of a name change for an academic unit,” consisted of four steps and included a vote from the state’s Institutes of Higher Learning board before the school could be renamed.

“For more than 50 years, Ed Meek has played a critical role in moving our university forward,” Vitter said in a statement released by the University following Meek’s request. “While his request tonight to remove his name from the Meek School of Journalism and New Media was made selflessly to permit the University to move forward, it is nonetheless regrettable and poignant. A primary hallmark of leadership is the willingness to sacrifice personal gain for the betterment of the whole. We commend the Meek family for their heartfelt response to the concerns of the UM community. We also acknowledge with appreciation and thanks their ongoing and permanent contributions to the University, which will be recognized by the Meek family’s legacy commitment to all things Ole Miss.”

No timeline has been released regarding when Meek’s name will be removed from the School of Journalism and New Media.

“I have spent my life in service to the Oxford-University community and have prided myself that I was a proponent of integration and diversity at all times. I helped to transform the department of Journalism into a School because of my passion for a free press, free speech, and an independent student media.  My desire then and now is for the School of Journalism to be a global leader in Journalism education.  I recognize that the attachment of my name to the School of Journalism is no longer in the best interest of that vision.  I love Ole Miss too much to be one who inhibits the University and the School from reaching the highest potential and it is with that in mind that I make this request,” Meek said.

Meek is a two-time graduate of UM and was employed by the school for 37 years before his retirement in Jan. 1999. In 2009, Meek and his wife, Becky, donated $5.3 million dollars to the school that was named in his honor

“Do not assassinate my character”: Student in controversial Meek…