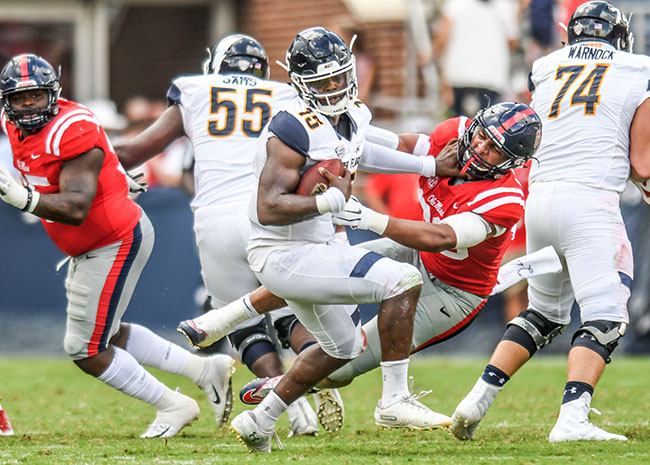 For Ole Miss, it was a tale of two halves.

Saturday’s 38-17 win over Kent State wasn’t pretty, with a first half full of sleepy, and sometimes sloppy, football.

But the game was an opportunity for the Rebels (3-1) to rebound following last week’s loss to Alabama. It took the second half for the offense to get its rhythm going, but Ole Miss finished the game with 651 yards of offense and 17 unanswered points.

Defensively, the improvement was marginal.

Heading into the fifth game of the season, Ole Miss’ defense still regularly takes a snap with players out of position. Linebackers still miss assignments in guarding receivers, often forced to chase a player with full-out sprints to catch up and make a tackle. Running backs still plow through the d-line with ease.

But Ole Miss had reasons to celebrate their progress on Saturday with 15 tackles for loss and seven sacks. The game also marks the first time this season that an offense has been held to fewer than 400 yards – Kent State (1-3) finished with 390.

“We are certainly going to build on the positives,” Ole Miss defensive coordinator Wesley McGriff said. “There were a lot of negative plays, a lot of activity in their backfield and that’s what we need to create. We need that kind of momentum on defense.”

Momentum is something that Ole Miss could use, with a night game against LSU – the team’s first SEC road trip of the season – looming on Sept. 29.

“I most definitely have thought or dreamed of playing (at LSU) before. I know it is going to be a hostile environment. I am ready. I am going to embrace the challenge,” Ole Miss quarterback Jordan Ta’amu said.

Currently, LSU’s offense is ranked 111th in the country, averaging 333.7 yards in three games. Defensively, the Tigers are 28th.

Despite an offense known to stall for quarters at a time this season, LSU (4-0) has made a name for themselves when it comes to finding ways to win.

Whatever remains for Ole Miss to make out of this season begins in Death Valley. The Alabama game was never going to go in the Rebels favor, and with visits from Auburn, South Carolina and Mississippi State awaiting later this year, a close showing against LSU could be what the team needs in order to take the next step.

Whatever that may be.

Donica Phifer is the Managing Editor of the Oxford Eagle. You can reach her at donica.phifer@oxfordeagle.com.