LSU loss offers opportunity for Ole Miss to reevaluate themselves 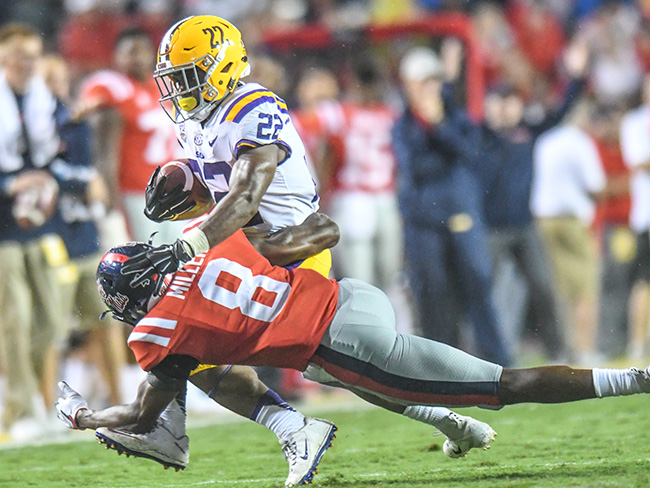 If Ole Miss hoped to use Saturday’s game against LSU to redeem themselves for their lackluster SEC performance so far this season, things didn’t go as planned.

LSU easily handled the Rebels in their best performance this season, cruising to a 45-16 win.

For No. 5 LSU there were plenty of reasons to celebrate, including an offensive performance that racked up 573 yards. Tiger quarterback Joe Burrow also had the best night of his career, throwing three touchdowns for 292 yards and using his legs to add 96 additional yards.

It is the third-straight win over Ole Miss for LSU and head coach Ed Orgeron, who coached the Rebels from 2005 to 2007. It’s also the sixth-straight win for the Tigers in Baton Rouge, where the Rebels haven’t won a game since 2008.

That Ole Miss team won largely on the back of a defensive squad that forced two turnovers and held LSU to 205 yards.

The 2018 version of the Ole Miss defense did nothing of the sort. Overall the Rebels had 167 yards in penalties to become the most penalized team in Tiger Stadium since 1937.

As a comparison, the Rebels finished with 150 rushing yards.

“I thought (we had) uncharacteristic penalties,” Ole Miss head coach Matt Luke said, “That’s probably what I’m most disappointed in. That starts with coaching, it starts with me and we were beaten soundly in all three phases and we’ve got to find a way to get better.”

Heading into Saturday’s game, Ole Miss was the 10th most penalized team in the SEC, averaging 70.25 yards per game.

That average will skyrocket once Saturday’s stats are added in, but Ole Miss’ 17 penalties are but one of many questions that face the team as they approach the halfway point of the season.

Aside from the obvious defensive problems, Ole Miss’ much-heralded offense hasn’t dazzled since the season opener against Texas Tech. Picking up where Alabama left off, LSU further exposed the woes of a Rebel team that truly struggles when it can’t get the ball to the wide receiver trio of A.J. Brown, D.K. Metcalf and Damarkus Lodge.

In both SEC games, Ole Miss has seen quarterback Jordan Ta’amu scramble to save a play and throw on a run. In the opening drive against LSU, the receivers dropped three passes and, later on in the second quarter, Ta’amu missed a sure-fire touchdown pass by overthrowing Lodge to further discombobulate an already frustrated offense.

The head-scratcher of the night lies in the mystery of Scottie Phillips – not that junior running back didn’t perform well, but the amount of time it took before Ole Miss called his number and elected to consistently run the ball. The resulting drive saw the Rebels march down the field to score their lone touchdown of the game.

Phillips had 16 carries for the Rebels on Saturday – his average per game this season – only six were in the first half.

While there’s never a guarantee of a win based on a ’shoulda, coulda, woulda’ mentality, the Tigers left the door open for Ole Miss even late into the third quarter. LSU coughed up three turnovers – though one was negated due to a penalty – but Ole Miss punted both chances away.

Meanwhile, LSU punted once in the entire game.

It’s easy to look at the Rebels and chalk up the poor performance thus far to the state of the Ole Miss defense. There’s no depth, there’s no consistency and lining up in the correct position is often a struggle as Hugh Freeze’s lack of defensive recruiting rears its head with vengeance.

But the problems facing Ole Miss isn’t just the defense. The offense has struggled to find the rhythm and explosiveness that was discussed at length in the offseason. Instead, Ta’amu and company have limped along based on the talent of his arm and the athleticism of Brown, Metcalf and Lodge.

So, what is next for the Rebels? It’s hard to say. Ole Miss has been outscored 107- 23 in SEC games this season, and the road won’t get any easier.

Sometimes, being exposed and soundly beaten in every facet offers an opportunity to reevaluate and flip the script. If Ole Miss isn’t already staring down that frightening reality, it will likely arrive in the coming weeks.

The Rebels have two true road games left on the schedule – Vanderbilt and Texas A&M – and a neutral site contest with Arkansas. But the toughest tests will be played out in Vaught-Hemingway Stadium against Auburn, South Carolina and Mississippi State.

Ole Miss is playing for pride this season. There’s no bowl game to hope for (not unless the NCAA reverses its ruling when the results of Ole Miss’ final appeal is announced), just pride in yourself, your team and a love of the game.

Games like LSU and Alabama can demoralize or energize, and if the Rebels want to salvage their season, something has to change.

Otherwise, the wheels will come off the wagon and Ole Miss will find themselves staring up at the rest of the SEC from the bottom of the barrel.

Donica Phifer is managing editor of The Oxford Eagle. You can reach her at donica.phifer@oxfordeagle.com.