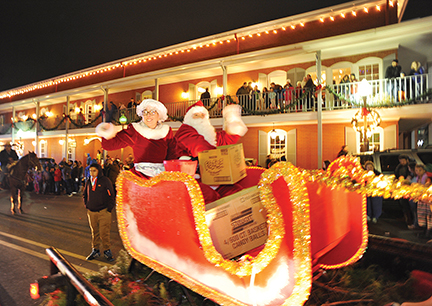 Bruce Newman “Santa” and “Mrs. Claus” ride on a float during the 2014 Oxford Christmas Parade.

The Christmas season will look a bit different in Oxford as the annual Christmas parade will undergo a few changes.

The 2018 parade, scheduled for Dec. 3 at 6:30 p.m., will have a new route of sorts after the Oxford Board of Aldermen voted to make the change during Tuesday’s regular meeting.

The new route will begin at the intersection of 5th Street and University Avenue before making a left turn onto South Lamar Boulevard. The parade will then head north towards the Square and travel up to Price Street, where the parade will end.

The route is the traditional course for the parade, but the procession will go in reverse, Emergency Management Director Jimmy Allgood said.

The change, Allgood said, was prompted by the growth of the parade over the years, to which he credited the work of the longtime parade sponsor, the Oxford Lions Club.

“We are a victim of our own success,” Allgood said. “But we’ve actually got to the point where the Midtown Shopping Center, as of last year, was really too small for us to utilize, so this is kind of a blessing in disguise.”

Oxford Mayor Robyn Tannehill added that with the growth of the shopping center, including several restaurants and the late hours of operation for the YMCA, that using the area to stage the parade became an inconvenience for all the local businesses and their customers.

“We have always had a very generous partner in all our parades with the Midtown Shopping Center,” Tannehill said, “They have been so generous to allow us to utilize that space for staging of all the parades that take place in Oxford. It inconveniences everyone in that shopping center. … We are sad to have to make a new plan, but we appreciate the many years they’ve allowed us to use that parking lot.”

This year, the stretch of University Avenue beginning at Taylor Road will serve as a staging space.

The center will serve as the pick up area as well as a space for participants to dismantle floats.

“We looked at three different areas and this area is the one least impactful to the community and it allows us to keep the same route,” Allgood said.

The staging area on University Avenue will close to traffic on Dec. 3 at 3 p.m. to allow participants time to ready their floats.

The new parade route will be 1.78 miles, including staging areas, making the new route slightly shorter than the 1.87 miles on the old route.

This year will also mark a new sponsor for the parade, as Tannehill announced that the North Central Mississippi Board of Realtors will take over and sponsor the event this year. The Lions Club ended their sponsorship in 2017 after 37 years, citing a decrease in active membership and participation as the average age of the club’s members increased.

“We really have to thank the Lions Club for all the hard work they put into this parade over the years,” Allgood said.

The Board of Realtors has already received requests for applications for participants in the parade, Allgood added.

Now that the route has been approved, the application should be available in the coming weeks.