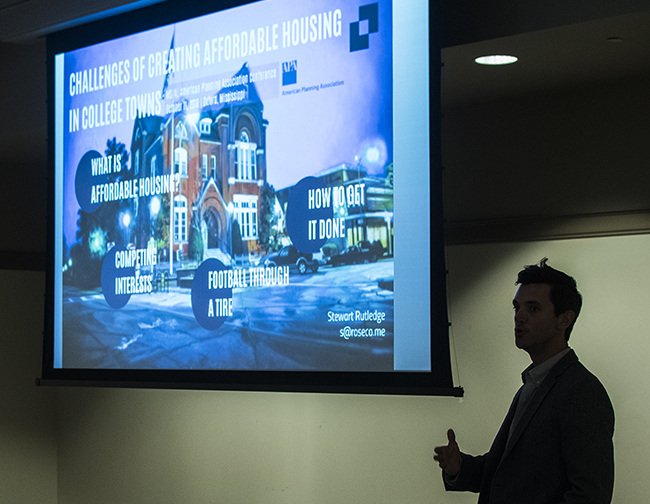 Stewart Rutledge speaks about affordable housing during the three day Mississippi and Alabama Chapters of the American Planning Association annual conference, at the Oxford Conference Center in Oxford, Miss. on Thursday, October 11, 2018.

The developments, named Belle Rivers and Eastover, will be located off University Avenue between Kroger and Highway 334. Each consists of 46 three-bedroom, two-and-a-half bath townhomes.

“It’s a double-edged sword in that it’s such a large need (for workforce housing) and (the developments) are so small in comparison to the overall need,” Rutledge said. “It’d be like if you were a hundred miles out in the ocean and you swam one mile inward. You’d be excited that you swam that one mile, but you are still 99 miles away from land.”

Rutledge estimates that there is demand for 2500 affordable housing units in Oxford, but with the difficulties of government regulations, land development and zoning codes, the cost of land and the return on investment for a developer, building more workforce neighborhoods remains a challenge.

“This isn’t a problem that is solvable,” Rutledge said Thursday after giving a presentation on affordable housing to members of the MS/AL American Planning Association in town for their annual fall conference. “I firmly believe that it cannot be solved. … Society will have ills, and I don’t think it’s wise to say ‘how do we solve ills?’ It’s wise to say ‘how do we address them?’ and that’s what Oxford has been able to do.”

The developments are funded through the Low-Income Housing Tax Credit program, which allows private investors – like Rutledge – to benefit in investing in affordable housing.

However, residents living in the developments at that time will be eligible to purchase the homes, some at a considerable discount.

Rutledge said that he believes attempts to build new workforce housing in Oxford has reached a plateau of sorts.

“That isn’t to say that it’s going to be the last time permanently,” Rutledge said. “But that for a time, developing affordable and/or workforce housing on this scale is going to be more difficult for a time – maybe five years.”

However, while building new developments might be paused, there are other opportunities to expand or improve the affordable housing already available in Oxford, Rutledge said.

One example United Church Homes, an affordable housing company that owns a complex behind McAllister’s Deli on University Avenue.

“We’ve been trying to work with them to see if we can expand what they do. They’ve been working on affordable housing in Oxford before anyone knew it was a problem,” Rutledge said.

Other ideas include working with Oxford Housing Authority and Oxford Mayor Robyn Tannehill to utilize new federal programs in order to take what affordable housing the City already has and to “make it better in quality, quantity, or both,” Rutledge said.

“There are other vehicles to get this done, they are just more challenging and less lucrative. This is how I feed my family, but we are going to do them anyway because we are here. I don’t mean that I’m a philanthropist, I just mean that I care enough to keep trying,” Rutledge said. “It’s a great opportunity not only because it’s needed but because it’s great for me from a business perspective.”

Rutledge estimates that Belle Rivers and Eastover will begin allowing families to move in sometime September 2019, which he said is an ‘ambitious’ date given inevitable weather delays during Mississippi’s winter and rainy seasons.

However, both developments will begin accepting applications for leases over Summer 2019. Rent is expected to be at or below $700 per unit, with annual income assessments required to ensure that residents still meet standards to be eligible for housing. Those assessments will be required each year before a lease can be signed.

To live in either neighborhood, individuals must earn at or below 60 percent of Lafayette County’s Area Median Gross Income. The county’s AMI is currently $43,000 per year.