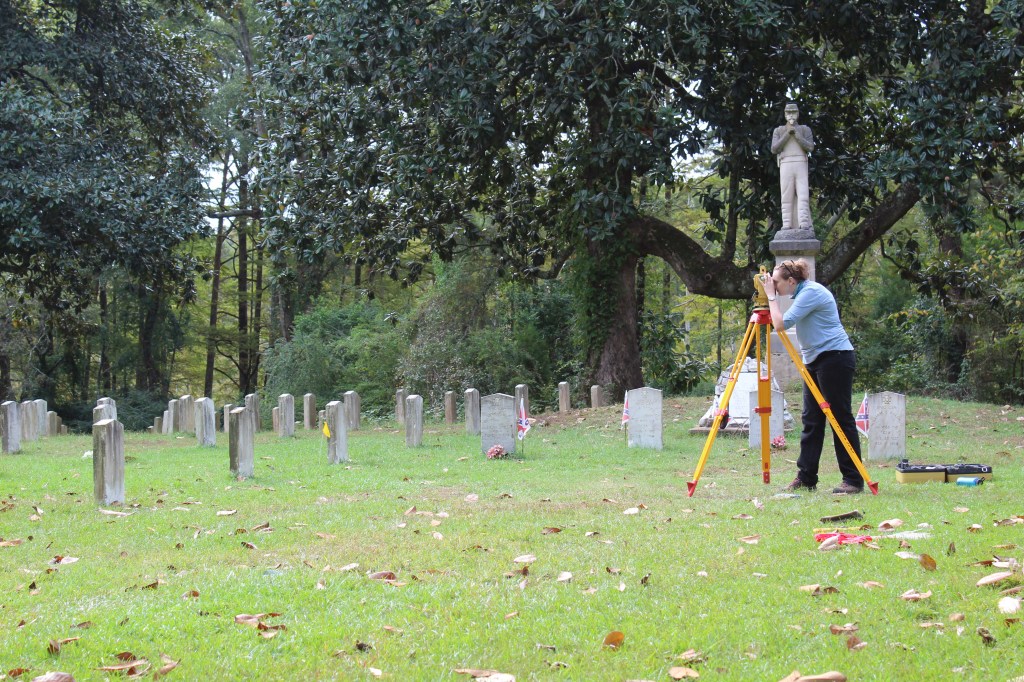 The University of Mississippi’s Center for Archaeological Research wrapped up a project last weekend as the Center’s director, Dr. Tony Boudreaux, and several students generated data on the location of several unmarked graves for Union soldiers in the Civil War.

The survey was a success, Boudreaux said, not only with the data accumulated from the work of the students but from interactions that the students had with members of the public during several instructional sessions held at Friendship Cemetery in Columbus, Miss.

“The local support and enthusiasm in Columbus was great. We had a pretty good turn out of students, especially from students from the Mississippi School of Math and Science on Friday who came out to see what was going on, and we had a steady stream of visitors on Saturday to ask us questions,” Boudreaux said.

Friendship Cemetery is well known for being one of the first places to host “Decoration Day,” the precursor to Memorial Day, where residents would decorate the graves of the soldiers in the cemetery.

Historians connected to the project guessed that up to 10 Union graves were unmarked.

Boudreaux said that it will take several weeks for the data generated during the survey to be analyzed, but the results of what has already been processed are exciting.

“I was very pleased with some of the data we got from the survey,” he said. “In parts of the cemetery, you could clearly see the grave shafts for a lot of these soldiers, though we aren’t for sure yet if there are graves in that area where we thought there might be unmarked graves because the data hasn’t been processed yet. But where the data has been processed, you can clearly see the grave shafts where these graves were excavated in 1862 and 1863.”

The data also indicated that far more burials took place in the cemetery than the above ground markers indicated, which is supported by documents given to the team by historians also working on the project.

“The section we looked at contained over 900 burials,” Boudreaux said. “According to documents, those deaths took place in a six-month period, so those soldiers were dying at a rate of 20 or 30 a day.”

Most of the men were brought to Columbus to convalesce following the Battle of Shiloh and the Battle of Corinth, including the suspected 10 Union soldiers and, Boudreaux said, the vast majority died from disease rather than wounds sustained in battle.

The technique that was used for the survey was non-invasive with Boudreaux expressing the importance of not disturbing the ground and the resting place of the soldiers in Friendship Cemetery.

“(The tests) are a way of looking at things without being invasive and can give you a decent amount of data if it works properly,” Marina Noble, a student who participated in the project, said. “If the conditions are right, it can give you really cool information. I was really impressed with the power behind the technology that we were using and the amount of data we were able to generate.”

To test the ground, the students used remote sensing technology, which looks for anomalies under the surface of the soil by sending an electronic pulse up to 20 feet into the ground. The pulses generate images of what the area beneath soil looks like. The team also used a magnetometer, which picks up localized differences in underground magnetic fields.

Noble, a senior biology student at Ole Miss, spent four days working on the project, which she said further encouraged her to pursue a career in archaeology.

“As a kid, I was always interested in archaeology, but I had this misconception that if you wanted to dig things up you had to go overseas. … But the fact we were able to see that there are situations in the states where archaeologists are not only needed but wanted, and the fact you can have a public group of people that are so invested in local history and willing to support us in every way possible and so willing to engage with us was an eye-opener for me,” Noble said.

Boudreaux said that the group will continue to analyze data and hopefully complete their report in the next few months. After that, it will be up to the residents and local officials in Columbus to decide what to do.

“Some folks have thrown out the idea of putting up a marker or a memorial for the Union soldiers that were buried there,” Boudreaux said, adding that a marker for the Confederate soldiers in the cemetery already exists.

For those interested in the efforts of the Center for Archaeological Research, Boudreaux’s class will host a public information day a bit closer to home on Nov. 10 at Rowan Oak from 10 a.m. to 3 p.m.