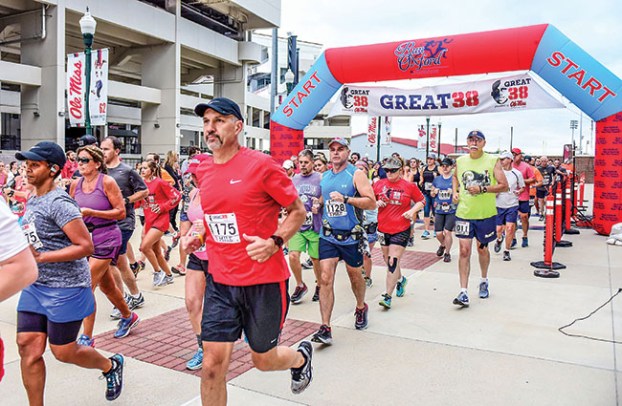 The streets of Oxford will be filled with runners this weekend as the 3rd Annual Great 38 Race kicks off on Friday.

The event, which features a 3-mile, 8-mile and 13.1-mile half marathon, serves to raise money for a scholarship geared towards University of Mississippi students with physical disabilities and students with exceptional financial need.

The race weekend is distinctive event in North Mississippi, with runners ending each race inside Vaught-Hemingway Stadium on the Ole Miss campus.

Runners cross the finish line at the 38-yard line, just one of many tributes to former Ole Miss football player Chucky Mullins.

Mullins wore No. 38 when he played for the Rebels in the 1988 and 1989 seasons. The defensive back was paralyzed during the 1989 game against Vanderbilt after tackling fullback Brad Gaines and died in 1991 due to complications from his injury.

“We wanted something unique for the race,” Great 38 Race Director Marvin King said. “Chucky Mullins is an inspirational figure and his is a story that a lot of people would be familiar with. To raise money for the scholarship, we needed to draw runners to the race and we thought this would do that.”

Mullins’ parents – Carver and Karen Phillips – supported the idea, as did Ole Miss Athletics who signed on to be a title sponsor for each year the races have been organized.

“You can’t replicate this race without Ole Miss Athletics,” King said. “They support us in so many ways, not only with financial support but also with the facilities that we use.”

The Great 38 Race will begin on Friday as participants can pick up their registration packets inside the Manning Center on campus. To coincide with that errand, the Visit Oxford Health and Race Expo will be held from 3 to 7 p.m.

The expo will also feature the YMCA Kids Zone, which will offer several activities for children to entertain themselves in “fun and healthy” ways, King said.

Participants in the 3-mile race will remain on campus, with the race beginning outside VHS at the plaza between the stadium and The Pavilion at Ole Miss. The race will go up Hill Drive to Chucky Mullins Drive and then cut through the quad outside the J.D Williams Library. The race will proceed along Dormitory Row, along Student Union Drive and through the Grove before the runners head back towards VHS and finish at the 38-yard line closest to the North end zone.

The 8 mile race will follow the same path, though runners will turn onto Grove Loop and proceed down Sorority Row to exit the campus and continue their run down College Hill Road to McElroy Drive. Runners will then follow Molly Barr Road to the Oxford Depot Trail and make their way through portions of Van Buren, South Lamar Avenue, Tyler Avenue and South 5th Street before turning onto University Avenue and following that route back to campus.

On Sunday at 7 a.m., the 13.1-mile race will begin on All-American Drive outside of The Pavilion and wind throughout Oxford before heading back to the Ole Miss campus.

Those who wish to participate can still register for the event through today by visiting http://thegreat38race.com. Registration fees are between $35 and $135 in price; depending on which race(s) an individual wants to participate in. All runners will receive a t-shirt and the finishers of the 8-mile and half-marathon finishers receive a race medal. Prize money will be awarded to the top 3 male and female finishers in each race.

Participants can also register the day of the races but King said those runners should allow plenty of time to complete registration before the races begin.

A Memphis man has been arrested by the Oxford Police Department on a charge of felony false pretense. On Sept.... read more