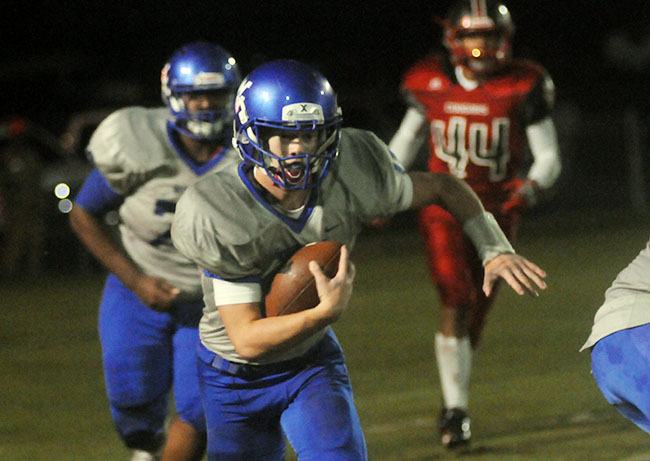 Water Valley's Jacob Truss (16) scores on a 96-yard touchdown run in the second quarter against North Panola in Sardis on Friday. (Jake Thompson)

SARDIS — Throughout most of the season Water Valley was the one lighting up the scoreboard and making Friday nights miserable for their opponents. In the final game of the regular season it was North Panola who turned the tables on the Blue Devils.

“They’re a good football team,” Water Valley head coach Brad Embry said of the Cougars. “I thought we played good in the first half. I didn’t think we played great. …Tonight they were better than us. Do I think they’re that much better than us? I don’t but if we play like that in the second half they are.”

The first two quarters were a much different story for the Blue Devils (9-2, 4-1 2-3A). The teams traded touchdowns in each of their first three drives of the game.

A 12-play drive that went 81 yards and ate up nearly half of the first quarter resulted in a 20-yard touchdown catch by Bud Tolbert to give the Blue Devils the early 6-0 lead. From there, the Blue Devils and Cougars (9-1, 5-0) went back-and-forth until the Blue Devils took a 19-18 lead into halftime. There was only one extra point or two-point try that was converted in six combined attempts by both teams in the first half.

The final score of the half, and the game for the Blue Devils, was a 96-yard touchdown run by quarterback Jacob Truss.

From there it was all North Panola the final 24 minutes.

Standout quarterback K.J. Jefferson put the Cougars on his back as they outscored the Blue Devils 34-0 in the second half. Jefferson ran for two touchdowns and threw for three others.

The backbreaking drives were the first two North Panola possessions of the second half. Jefferson ran in from three yards out to cap a lengthy drive to open the third quarter. After a short punt by Water Valley’s Jacob Truss gave the Cougars a short field, Jefferson threw a 48-yard touchdown pass to Tyler Shorter on 3 & 18 to make it 32-19 late in the third quarter.

“We haven’t had to play four quarters against this whole region, but they haven’t either,” Embry said. “That’s the end of that. You can use an excuse but they can use the same one and they didn’t. So, we’ve got to do better. I’m just kind of confused about a lot of things. We had a few guys cramping. That’s strange. I don’t know what to say. You get what you earn sometimes.”

With the loss the Blue Devils are the No. 2 seed out of the region and will host Yazoo County in the first round of the MHSAA Class 3A playoffs on Friday. It is a rematch of last season’s second round where Yazoo County ended Water Valley’s season on their way to a state championship appearance.