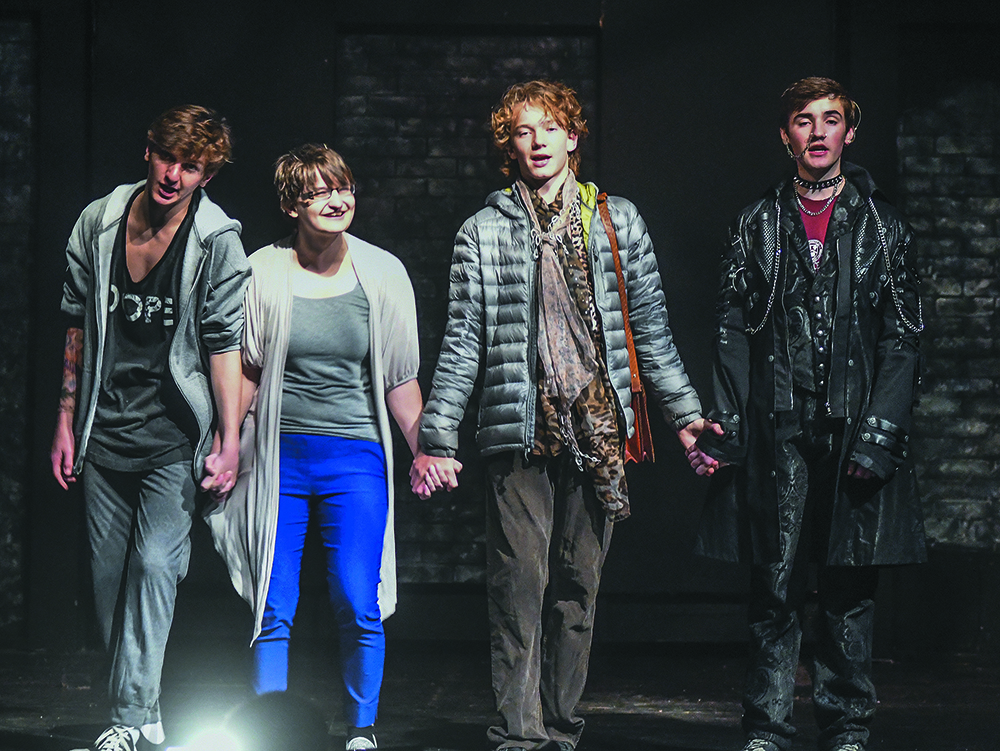 Oxford High students, from left, Prowell Smith, Noël Torma, Lucas McKeown, and Ethan Holben rehearse for a version of The Wizard of Oz that takes place in a psychiatric ward, in Oxford, Miss. on Friday, October 26, 2018. The play will be performed October 29-31 at 7:30 p.m. each night at the Kayla Mize Theatre at Oxford Middle School. (Bruce Newman)

Theatregoers will be taken down a different sort of yellow brick road as Oxford High School Theatre begins performances of ‘The Wizard of Oz’ on Monday.

“The way the audience will see the world is the way Dorothy sees it,” OHS Theatre director John Davenport said. “It is a lot of grays and blacks because it’s very scary to her.”

While the story remains the same – Dorothy’s journey to the Emerald City with a goal to get back home – OHS’ production is set in a psychiatric ward for a creepy, Halloween-appropriate twist.

“(The show) is very dark,” John Davenport said. “It is not the traditional, beloved tale. … It’s very much “Alice in Wonderland” meets “The Wizard of Oz” meets “One Flew Over the Cuckoo’s Nest.’”

Davenport’s history with this reincarnation of ‘The Wizard of Oz’ dates back to 2014 when a group of OHS Theatre students performed the show at the International Fringe Festival. The show was a hit in Scotland and Davenport always hoped the opportunity would arise to create a full-scale production in Oxford.

The script for the show comes from a 1940’s iteration of the tale, which contains all the music from the 1939 film. However, the script itself adheres more to the book written by L. Frank Baum, Davenport said.

“We haven’t done anything with the script. … This treatment is our overlay,” Davenport said. “The lines (in the script) were so thin and it was so easy to just read between them. If you hit some lines a certain way it could totally change the meaning.”

rehearse for a version of The Wizard of Oz that takes place in a psychiatric ward, in Oxford, Miss. on Friday, October 26, 2018. The play will be performed October 29-31 at 7:30 p.m. each night at the Kayla Mize Theatre at Oxford Middle School. (Bruce Newman)

The show features OHS senior Noël Torma as Dorothy who said the show has been a challenge to create, partially due to the scare factor.

“A big part of the reason why the show is scary is the uncertainty Dorothy has about what is going on,” Torma said. “And that includes the uncertainty she has about herself. And that’s what really drives it home in the end – you get connected to these characters, it’s very easy to love these characters and that makes certain aspects of this (version) very difficult.”

With the backdrop of a psychiatric hospital, Dorothy’s friends – the Scarecrow, the Tin Man and the Cowardly Lion – are all fellow patients and each character has their own reason for being admitted.

OHS’ reinvention of the show will still include all the songs from the film, including “Somewhere over the Rainbow,” which Torma said Dorothy uses less as an expression of hope and daydreaming and more as a coping mechanism.

“Dorothy actually uses the song to calm herself down and as a way to remind herself of home and other things she’s familiar with because she’s been tossed into an unknown world,” Torma said. “It is very jarring for her to be there because it’s not immediate prevalent why she’s (in the hospital) in the first place.”

“This show is such an experience,” stage manager Julia Mitchell said. “For the audience to come and see this version, it’s such an experience because it’s almost like the audience has a role. They’re trying to figure out what is going on. It’s not too convoluted; it’s not too confusing. There are clues everywhere and as a watcher, you are trying to figure out what is happening as you watch the traditional story and see these familiar characters.”

Over the course of the show, Torma said the audience can expect to question what is actually happening and what is merely a figment of Dorothy’s imagination.

“That question will answer itself, but even that will be open to interpretation,” Davenport said.

Mitchell said that the show is a “fulfilling” experience for audiences and that the big reveal at the end – which was kept secret from most of the cast until final rehearsals last week – will pay off immensely.

“Yes, it’s a scary Halloween show,” Mitchell said. “But it is the kind of show that almost anyone would enjoy because it is so interactive. You don’t have to be a theatre nerd to enjoy this.”

However, Davenport recommends that children under age 10 do not attend the production due to the darker theme as well as some lighting and sound effects that could prove frightening.

OHS Theatre’s production of “The Wizard of Oz” will be performed Oct. 29 through 31 at 7:30 p.m. each night at the Kayla Mize Auditorium on the Oxford Middle School campus. Tickets are $11 and can be purchased at the door or by visiting https://squareup.com/store/ohs-theatre/.