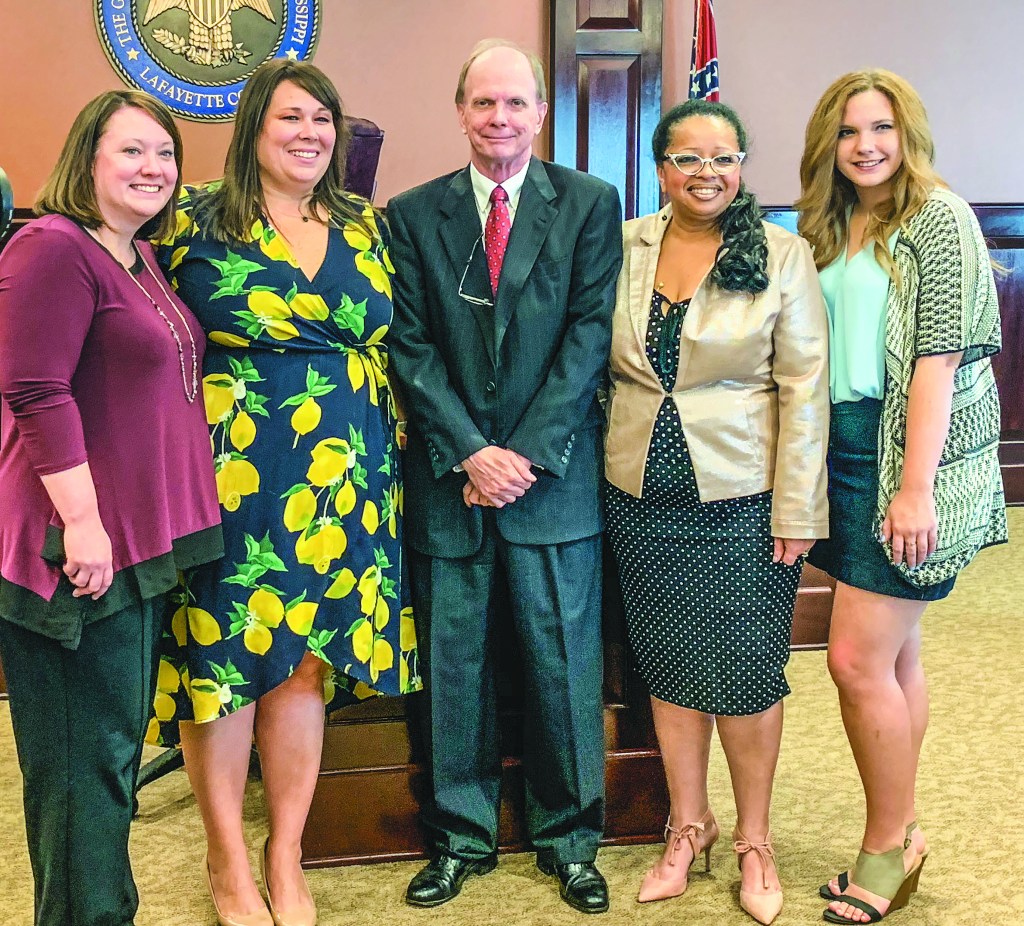 On Tuesday morning, four women stood up to take an oath with one goal in mind – protecting some of Lafayette County’s most vulnerable children.

The women were sworn in as CASA volunteers, a national organization that seeks to give children a voice as they navigate the tangled legal system of youth and family court.

CASA stands for court appointed special advocates, individuals who are appointed to advocate for the best interests of children involved in court proceedings.

The women mark the first group to be sworn in to the Lafayette County chapter, approximately eight months after Smith organized the nonprofit in February 2018.

“We are dealing with children in their most vulnerable state,” Smith said. “So they don’t know what the next day holds, even if they are in foster care or in a foster home.”

CASA was founded in Seattle in 1977 when Seattle Juvenile Court Judge David Soukup became concerned about the life-changing decisions he was required to make about the families who came into his court. Soukup outlined the idea of having citizen advocates for the abused and neglected children involved in court cases, and for those advocates to get to know the children and each child’s situation in order to assist the judge.

Currently, CASA has over 1,000 chapters installed across the United States.

Duties for CASA advocates include accompanying children to visits with their parents or other adults in their lives, school, court and doctor’s visits and getting a sense of what the situation is for each child.

Youth Court Judge David Bell, who led the women in their oath, stated that he was skeptical when Smith approached him about the program due to many people asking to begin a CASA chapter and never following up but that Smith was the one who did and brought a much-needed organization to the area.

“I’ve often been asked by friends and family, ‘what’s the hardest part of your job?’” Bell said. “And the foster care side of the job is harder to me. … They are the ones that wake me up in the night. But my response has generally been that I am asked to make crucial decisions about the lives of children with insufficient information and my view is to that today, moving forward, that CASA will help me by providing a picture of information about what is going on with the child. ….It is crucial to try and get it right.”

Smith said as of April 2018 that there were about 30 foster children residing in Lafayette County, all of whom need advocates. CASA only serves one case as a time, differing the organization from other programs like guardian ad litems who take on multiple cases.

“We are always looking for more volunteers,” Smith said.

Carey Neil, one of the women sworn in on Tuesday, said that she got involved with CASA after working with the Department of Human Services and because of experiences that members of her family had as part of the foster system.

“No one spoke up for (my relatives) at the time,” Neil said. “So I just felt like I needed to do this. … We just want to provide them with safe, happy homes so that they can thrive.”

Terry Alles-Hunter, another volunteer, resides in Desoto County and got involved because of her previous experience fostering children.

Smith said that the program is looking to move from an in-person training course to a flexible course where volunteers would complete half of their hours in person and half in a virtual classroom setting.

CASA of Lafayette County is the sixth chapter to be formed in Mississippi, and the only chapter to exist in North Mississippi. Other chapters operate in Hancock, Harrison, Adams and Rankin counties. An additional chapter, located in Warren County, serves Warren, Rankin, Hinds and Yazoo counties.

However, Smith is looking to expand CASA in the future, starting in Pontotoc and Lee County.

‘Be Bold, Be Brave, Be Beautiful:’ Thompson uses cancer…