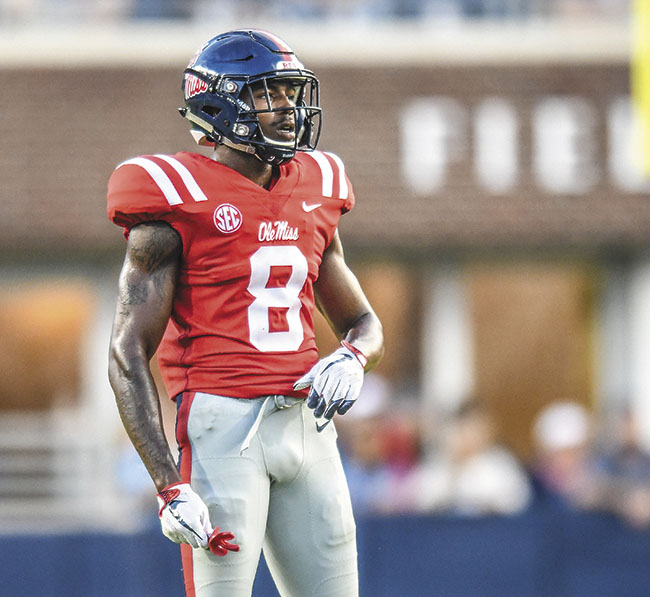 Ole Miss C.J. Miller (8) will be returning to action this weekend after being injured earlier this season. (Bruce Newman)

OXFORD — Ole Miss rested up and now the final push of the season begins. The Rebels begin with South Carolina on Saturday (11 a.m., SEC Network), a contest that marks four games in a span of 19 days for the team. It ends with the Egg Bowl and Mississippi State on Nov. 22.

“I think the bye week came at a perfect time to give us a chance to really focus on some things that we need to get better at,” Ole Miss head coach Matt Luke said. “It also gave us a chance to get healthy.”

The defense is getting two key pieces back in C.J. Miller and Austrian Robinson. Miller missed the Arkansas and Auburn games while recovering from an ankle injury. In the month since he last played, against ULM on Oct. 6, Miller has been trying to return, but setbacks hindered his chance to face the Razorbacks and Tigers.

This week, Miller is able to take the field against the Gamecocks.

“It was a hard thing going through,” Miller said. “Just watching my team work and I’m not out there to be able help. My ankle feels better than it did. Now, being able to be back out there and practice with the team and going hard, it just feels great.”

Miller is not fully healthy but is ‘trying to play like it’ in his return to the field, he said.

During Miller’s absence, running backs Armani Linton and Tylan Knight moved over to the defensive back room due to the rash of defensive injuries. While watching from the sideline, Miller was happy to see Linton be able to fill the void he created.

“I feel like (Linton) stepped up,” Miller said. “He’s taking the role well. He already knew the plays last year. Armanti is a good player. He taught me last year when I first got here just the plays and the fundamentals. He helped me a lot, so I appreciate him for that.”

For the game itself, it is the first time Ole Miss (5-3, 1-3 SEC) and South Carolina (4-3, 3-3) have met in nine years. The last meeting was in 2009 when the Rebels were ranked No. 4 in the nation and traveled to Columbia to play in front of a national audience in primetime. The Gamecocks upset Ole Miss with a 16-10 victory.

This will be the 16th game in the series and the Rebels hold an 8-7 edge overall.