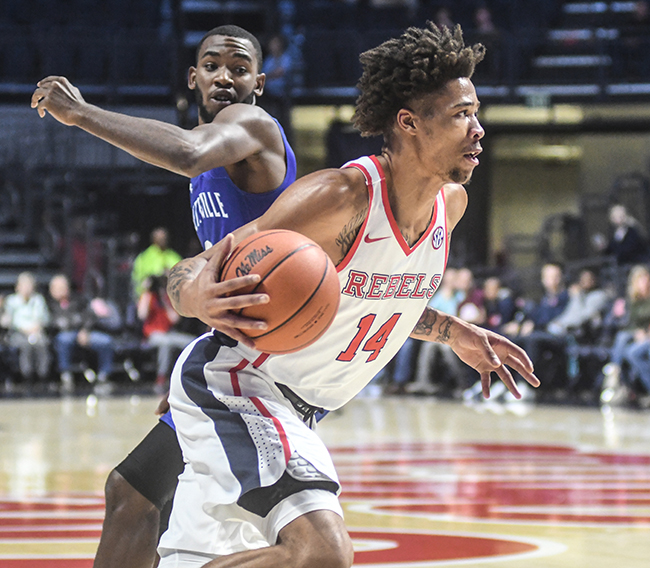 Yesterday, in part 1 of the preview, we explored new head coach Kermit Davis’ background and his feelings about how a stat line can reflect what he wants from his team on the court.

OXFORD – Kermit Davis Jr.’s first season in Oxford sprinkles together a bit of veteran experience with a bit of young blood. Three of the starters return from last year’s team in Terence Davis, Breein Tyree and Bruce Stevens. They will be joined by Kermit Davis’ first recruiting class of four, three-star recruits, led by 6-foot-7 swingman KJ Buffen.

Ole Miss will play a modern scheme that emphasizes ball movement. However, they will play two big men that touch the ball often. Seven-foot center Dominik Olejniczak and 6-foot-8 Bruce Stevens will often be on the floor at the same time, aided by Stevens’ offensive flexibility.

“Bruce can really pass and really shoot so I have way more space,” Olejniczak. “But it’s not just Bruce. Blake (Hinson) and KJ (Buffen) they can both play (power forward).”

Olejniczak’s statements iterate much of what Davis is looking for in a team. He wants the ball to move and wants to emphasize versatility. Guys that can play multiple positions well are incredibly valuable.  This can be seen both when building future teams through recruiting and coaching up the team he has now.

“Size and skill level. That’s what we’re going to try and get our team to look like at hopefully about four positions,” Davis said. “Guys that are totally interchangeable and can play. I think this recruiting class we’re assembling right now (looks like that).”

A great example of the sort of multipurpose player Davis is talking about lies in freshman KJ Buffen. Buffen, a three-star recruit according to 247sports, was originally committed to play for Kermit Davis at Middle Tennessee before following Davis to Oxford.

Listed at 6-foot-7 and 220 pounds, great size for a true freshman, Buffen can play both forward spots and is a tremendous passer for his size. Buffen played in all four games of the Canada trip, starting twice. His versatility will set him up to play big minutes for the Rebels.

The desire for versatility goes beyond having players capable of playing different position. The Ole Miss team has a plethora of players that can score. Outside of Terence Davis, who seems to have solidified himself as the team’s leading offensive option, it’s unsure who else will be the go-to option offensively on a night-to-night basis.

Stevens and Tyree both scored over ten points per game last season. Add in Kermit Davis’ hand-picked freshman class, and this team is going to have options.

“We’ve got so many weapons. Everyone can score,” Olejniczak said. “The defensive system of the teams we play have to be prepared for everything.”

The Rebel season and the Kermit Davis era of Ole Miss basketball will get underway Saturday at 3 p.m. against Western Michigan from The Pavilion.