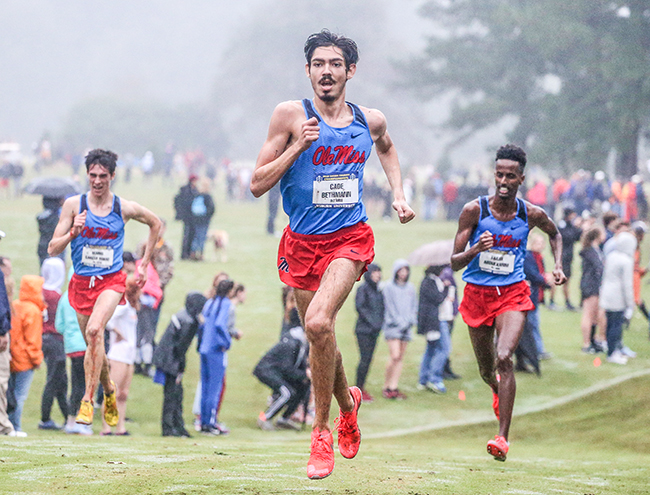 OXFORD – Cade Bethmann walked around the team meeting room of the Manning Center a bit curiously. He took a seat, noting out loud – as if he were surprised – the comfort level of the chairs in the amphitheater-style room.

“You’ve never been in here before, have you?” asked head cross country coach Ryan Vanhoy.

A simple trip to a room typically reserved for football team meetings and media sessions is yet another first for a Ole Miss men’s cross country team, a team that has seen a lot of firsts in 2018.

Two weeks ago, the team won its first ever SEC championship. Last week they dominated the NCAA South regional. This weekend, as the nation’s ninth ranked team according to FloTrack, they travel to Madison, Wisconsin for the NCAA Championships.

The Rebel squad is rather young. Vanhoy said after the regionals that these accomplishments were rather unexpected due to the inexperienced nature of the team. Six Rebels earned All-Region honors last week. Of the six, five will return next year and four are freshman or sophomores.

Ole Miss has come close to taking home SEC’s in the past, finishing second in both 2014 and 2016. The program was on the rise, but it was up to this group to take the next step.

“Over summer camp, we had a team meeting. A lot of us decided that the past guys did such a good job of building a program that we knew it was on us, the younger guys, to continue that tradition,” said redshirt freshman Cade Bethmann.

Not only did they continue the tradition, they built on it. In the process of winning the SEC Championships, Bethmann was named the SEC Freshman of the Year and Vanhoy was named SEC Coach of the Year.

Surprisingly for such a major contributor to the Rebel team, Bethmann rarely ran longer distances before enrolling at Ole Miss. In high school, he was primarily a middle-distance runner. High school cross country, which he never ran extensively, is a 5-kilometer race. In college, cross country races are 8 or 10-kilometer races.

“That jump is pretty big for even experienced people in cross country, so for me who wasn’t exactly good in high school, that was an even bigger jump,” Bethmann said. “The jump from not even contributing in high school to contributing at college has been huge for me.”

While Bethmann was around for the prior season, he was not competing. For the members of the team who had ran and been so close in the past, finally getting over the hump was a huge moment of pride.

“I definitely was too excited. I know the guys for years have been trying to win (SEC’s), and they’ve always fell short,” said sophomore Waleed Suliman. “For me to be part of the team last year, who were the guys that had been around trying to get it, and then be part of the team that actually did it, made me realize how hard they worked for it.”

Suliman is from Sudan. He grew up in Jordan and moved to the States in 2014. But he is far from the only international member of the cross country team. The small team brings together runners of a plethora of different nationalities, from all corners of the world. From Canada and Spain to New Zealand and Sudan.

“It’s interesting. Our team has always been sort of know as a team that likes to have a good time. They’re upbeat. They’re fun. They enjoy the mundane task of training,” Vanhoy said. “I think having guys and girls from diverse backgrounds, it’s entertaining and you get to learn about different parts of the globe. Getting to know people from all walks of life is certainly a pretty fulfilling part of the job.”

Vanhoy’s weekly goal for the team is simply to improve on past performances and validate their standings by out-performing the national rankings. Nothing changes going into the NCAA Championships. However, for such a young squad, the outlook beyond this weekend’s trip to Madison is bright.

“The goal for this year is to be around top-10. But for the following years, knowing that most of the guys on this team are going to come back for the next two years, obviously the goal is going to be higher,” Suliman said. “For next year the goal is probably going to be top-5. The year after, we all were talking about it, and we’re thinking about winning the national championship.”