Defense lifts Water Valley past Houston for 3A North Half berth 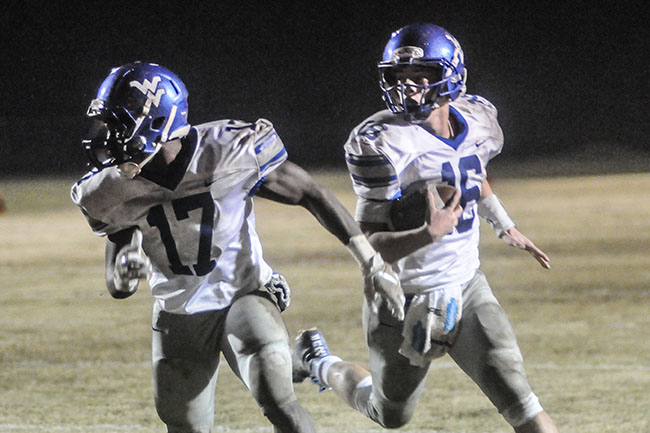 Water Valley's Jacob Truss scores a touchdown on a five-yard run in the second quarter against Houston during their Class 3A quarterfinal round game at Houston High School on Friday. (Jake Thompson)

HOUSTON — All season Water Valley’s offense has put up points and taken the pressure off the defense. On Friday night it was the defense’s turn to repay the favor.

The Blue Devils ended a 22-year drought with a 20-8 win over Houston in the quarterfinal round of the MHSAA Class 3A playoffs. For the first time since 1996, Water Valley will play in the North Half championship game next week.

“They definitely earned it. They worked,” Water Valley head coach Brad Embry said. “We say that all the time. You get what you earn and they earned a North Half title game.”

A Blue Devil team that was averaging 37 points a game had to fight for every point they scored and got a little help from the defense. Jacob Truss scored two of the Blue Devils’ touchdowns but the offense managed much else the rest of the night. Truss and rushing touchdowns of 26 and 5 yards in length in the first half.

There were a couple missed opportunities for Water Valley (12-2) to put the game out of hand early but miscues plagued them. Two times the offense got inside the Houston 5-yard line and both teams the Blue Devils fumbled the ball away.

“We get up and I think we got them pegged, defensively and we took a shot here and there,” Embry said. “Field position and points. If you can play defense and run the football, and we didn’t run the ball like I wanted to tonight. But that’s a good football team, too. You’re not going to do what you want all the time. I’m still very pleased.”

The play of the game occurred late in the second quarter when Houston quarterback Jalen May fumbled the ball and a waiting Damicah Hervey picked it up for a 60-yard scoop-and-score to make it a 20-0 lead for the Blue Devils at halftime.

With the offense sputtering and struggling to extend drives it made for a long night for the defense. They bent at times — allowing a 4-yard touchdown run by May in the fourth quarter — but the defense never broke.

“The effort was there and (Houston) only scored eight points. So, we definitely did some things right,” Embry said.

Now the Blue Devils get a rematch with North Panola in Sardis next week with a berth to the Class 3A state championship game in Hattiesburg on the line. The two teams met in Sardis for the regular season finale on Oct. 26 in the Region 2-3A title game with the Cougars coming away with the 52-19 win.