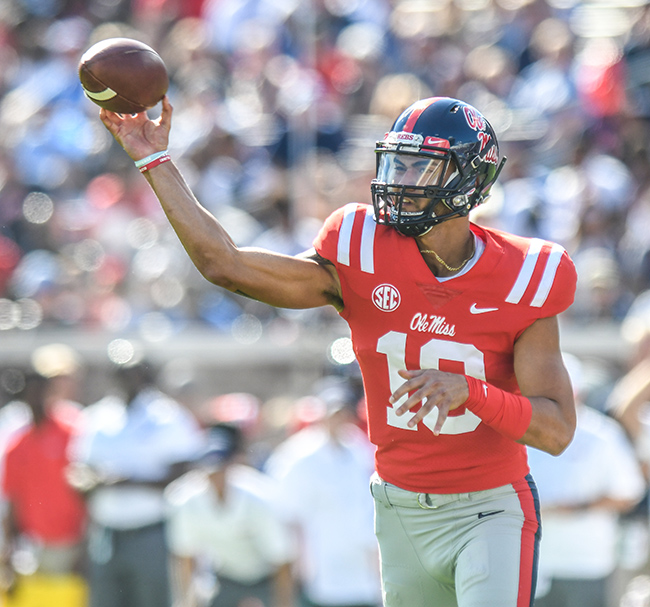 We’re here live from Nashville at Vanderbilt Stadium for the last Ole Miss road trip of the season. Ole Miss and Vanderbilt will kick off 6:40 p.m. Central time and can be found on SEC Network.

Ole Miss (5-5, 1-5 SEC) is looking to end their three game losing streak, falling last week to Texas A&M 24-38. Vanderbilt (4-6, 1-5 SEC) is also coming off a loss, a 28-33 game at Missouri. Both teams are seeking just their second win in the SEC, but to add a little more intrigue to the game, a win for Vanderbilt will make them bowl eligible.

The Rebels have won 4 of the last 5 meetings, including 2 of the last 3 games in Nashville.

What looked like a game-tying catch by AJ Brown on 3rd down was later ruled an incompletion upon review. Subsequent 4th-and-6 pass attempt to DaMarkus Lodge incomplete. Final.

Vandy strikes first in OT. Strong run by Ke’Shawn Vaughn took the ball down to the 5-yard-line before a Lipscomb slant rout gets the score. Ole Miss 29 – Vanderbilt 35. 1OT.

Ta’amu deep ball attempt is intercepted by Vanderbilt. He had two Ole Miss receivers open deep, was just late getting rid of the ball. Big play for the Commodores late in the game. Ole Miss 26 – Vanderbilt 29. 3:00 4Q.

Good coverage by Ole Miss forces Vandy into a field goal. 44-yard attempt is good. Special teams have been a big factor this evening in the Commodores favor. Ole Miss 26 – Vanderbilt 29. 5:20 4Q.

DaMarkus Lodge finished off a fast scoring drive for the Rebels with a spectacular one-handed touchdown grab. It was an impressive drive by Ole Miss freshman running back Isaiah Woullard, gaining a handful of chunk plays on the ground. AJ Brown, unsurprisingly, had his own fantastic catch on the sideline during the drive. Unreal catch by Lodge, and we’re tied here in Nashville. Ole Miss 26 – Vanderbilt 26. 9:43 4Q.

Jordan Ta’amu intercepted from the Vandy 23. Hard to understand that ball across the middle – must never have seen the Vanderbilt defender. Vandy will take over at their own 34 following offsetting unsportsmanlike penalties. Ole Miss 19 – Vanderbilt 26. 13:29 4Q.

Another long, efficient drive by the Commodores ends in a C.J. Bolar touchdown reception from Shurmur. Vandy converted a 4th and 1 from the Ole Miss 8-yard-line earlier on the dive. Ole Miss 19 – Vanderbilt 26. 0:49 3Q.

Not to be repetitive, but we have another redzone field goal attempt for the Rebels. The kick is good and the game is tied. Ole Miss 19 – Vanderbilt 19. 6:26 3Q.

Quick drive for the Rebels stalls in the redzone yet again. Big chunks by Brown, Lodge, and Woullard set up the redzone trip, but an intentional grounding by Ta’amu proved too much to overcome. Field goal pings the upright but good. Ole Miss 16 – Vanderbilt 19. 9:00 3Q.

Hot start to the second half by Vanderbilt. Did most of the work on the ground plus one big-time throw from Shurmur. Ke’Shawn Vaughn punches it in for the score. Ole Miss 13 – Vanderbilt 19. 11:33 3Q.

Kyle Shurmur’s pass intercepted by Ken Webster, his second interception in two weeks. That will just about do it for the first half here in Nashville. Ole Miss 13 – Vanderbilt 12. 0:06 2Q.

Ole Miss goes three-and-out, but has the punt blocked by Vanderbilt. The ball bounces through the end zone for a safety and two points for the Commodores. Ole Miss 13 – Vanderbilt 5. 3:56 2Q.

Best offensive drive of the day for Vanderbilt stalls in the redzone. A great tackle for loss by Ole Miss’ Qaadir Sheppard created a third and long for the Commodores. Shurmur’s pass on third is incomplete and Vandy settles for a field goal. Ole Miss 13 – Vanderbilt 3. 5:44 2Q.

AJ Brown is special. Showing off what made him the Ole Miss all time leading receiver last week, taking a short hitch 84-yards for the touchdown. One play drive for the Rebels. Ole Miss 13 – Vanderbilt 0. 9:41 2Q.

More redzone woes for the Ole Miss offense. DeMarkus Lodge stepped out of bounds at the 1 on what appeared to be a touchdown. Jason Pellerin dropped a touchdown. Isaiah Woullard loses two on a third-and-goal carry from the one yard line. Ole Miss 20-yard field goal is good. Ole Miss 6, Vanderbilt 0. 11:56 2Q.

End of First Quarter: Ole Miss 3, Vanderbilt 0. Another strong defensive showing early from the Rebels. Fell apart in the later quarters last week – time will tell if this week will be any different.

Rebel drive stalls in the redzone – a problem for the team all season. Jordan Ta’amu scrambles for no gain on 3rd down to bring on the field goal unit. Luke Logan’s 32-yard FG is good, and the Rebels get on the board first. Ole Miss 3, Vanderbilt 0. 5:22 1Q.