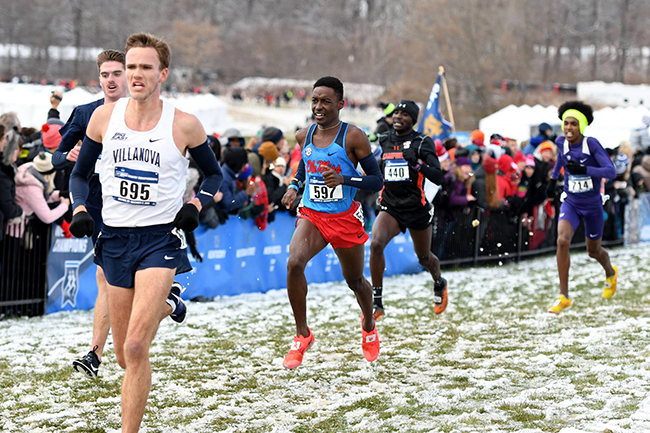 Ole Miss men’s and women’s cross country season came to a conclusion Saturday at the NCAA Championships in Madison, Wisconsin.

Coming off wins at both the SEC Championships and the NCAA South Regional, the men had a relatively disappointing 17th place finish. Sophomore Waleed Suliman finished 36th, giving him All-American honors. The women’s team also finished the top 25, coming in at 22nd place.

Weather in Wisconsin presented an interesting challenge for the Rebels. Temperature around race start was hovering at freezing and there was an inch of snow on the course.

Only seven schools have had both men and women place in the top 25 in the past three years. The 22nd place finish by the women was the best showing in program history. It was the second-best NCAA Championships finish for the men.

“The men had a decent day,” said head coach Vanhoy. “We were a few individual performances away from a top-10 to top-12 team finish, but walking away with our second-best finish in school history is nothing to be ashamed of.”

Vanhoy described the women’s performance as their “best collective effort of the season,” praising Ozanne-Jaques’ impressive start to the race and season as a whole.

The Ole Miss team is very young on both the men and women’s front. The men will return six of their top seven runners – five of them are freshman or sophomores. The top seven women will all return. This meet may have ended this season, but there is high hopes for the future of the Ole Miss cross country program.

“We gained a lot of valuable experience today, laying a good foundation for the next few years as 13 of the 14 athletes who ran today will return next season,” Vanhoy concluded.

Suliman said last week that the goal for the men at the NCAA Championship was to finish top ten. Vanhoy wanted to outperform and validate their 9th place ranking entering the weekend. From that standpoint, the Rebels didn’t quite live up to their own expectations, but there are high hopes for the young team.

This year alone, the men won the SEC Championship for the first time in program history. Returning so many of their top runners sets their sights high. Suliman wants to finish top five next season at the NCAA Championships. Two years from now, he expects the team to win the whole thing.