“A bond like you won’t see anywhere else”: Egg Bowl a send-off for resilient senior class 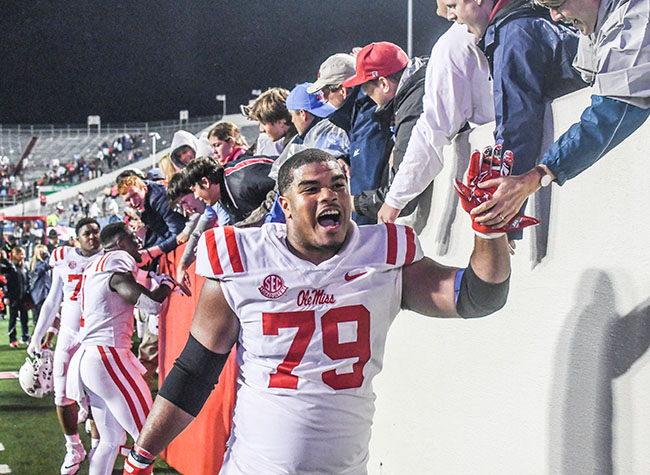 OXFORD – For an Ole Miss senior class that won’t be playing in a bowl game for the second consecutive year, Thursday’s Egg Bowl is a de facto bowl game for a group that has been through hell and back in their time as a Rebel.

This senior class has seen just about everything. Many were here for the ten-win season in 2015, the season that included the first win in Tuscaloosa since 1988 and a Sugar Bowl victory. But they were also here for the collapse in 2016, an NCAA investigation and the resignation of their head coach following the discovery that he used his university phone to call an escort service.

There have been some serious ups and downs for the group that will play their last game as a Rebel on Thursday. In wake of the scandal that ended the Hugh Freeze era of Ole Miss football, Ole Miss self-imposed sanctions on themselves. They announced they would not accept an invitation to a bowl game in 2017. Additionally, there would be scholarship reductions through the 2018-2019 season and recruiting restrictions.

“It was just a crazy period,” said senior quarterback Jordan Ta’amu. “It was a pretty rough time… (but) it was just one more mountain in the hill.”

The NCAA investigation upheld all self-imposed penalties and issued an additional season of bowl bans, through this 2018 season. With the sanctions, Ole Miss seniors were allowed to transfer without penalty. This senior class had decisions to make.

“A bunch of us said ‘hey, let’s stick here and ride this out,’ said senior guard Javon Patterson. “That’s the brotherhood we bring and that’s the legacy we want to leave when we leave Ole Miss. It shows a lot about this team, and the character, heart, pride and passion that it takes to play this game at a high level.”

It was a relative consensus by the senior class – they weren’t going anywhere. Some younger players, players with less of a bond with the program, decided to move on. Current Rebels have no ill-will towards players who decided to leave, saying everyone had to make the decision that was best for them individually.

Senior defensive back Zedrick Woods said he never considered transferring. The sanctions were a struggle for the older players, knowing that they’d never again play in a bowl game, However, the program and teammates meant to much for them to go.

“(It’s) a bond like you won’t see anywhere else in college,” said senior defensive back Zedrick Woods. “We had no bowl game to play for. (We play) for each other.”

Sophomore linebacker Mohamed Sanogo stuck around but watched as his two best friends on the team transferred. While it was hard to see them go, he said the guys who stayed are better for it. The team, as a whole, is stronger for what they’ve been through.

“It really brought the whole team closer together,” Sanogo said. “We were the guys that decided to stay and decided to make a difference and not let some adversity change who we are.”

For the senior class, and a handful of juniors likely headed to the NFL, Thursday’s Egg Bowl is the last game they will play in an Ole Miss uniform. The Mississippi State game is this class’ bowl game. Ultimately, the coaching staff said they were surprised by the number of guys who did leave. However,  the seniors sticking around and facing the adversity will leave a lasting mark on the staff.

“They stuck with the program even in the darkest moments,” said defensive coordinator Wesley McGriff. “That’s certainly going to be part of their legacy. There’s certainly love for their commitment.”