This thanksgiving, here’s how to talk to your relatives about the state of Ole Miss football 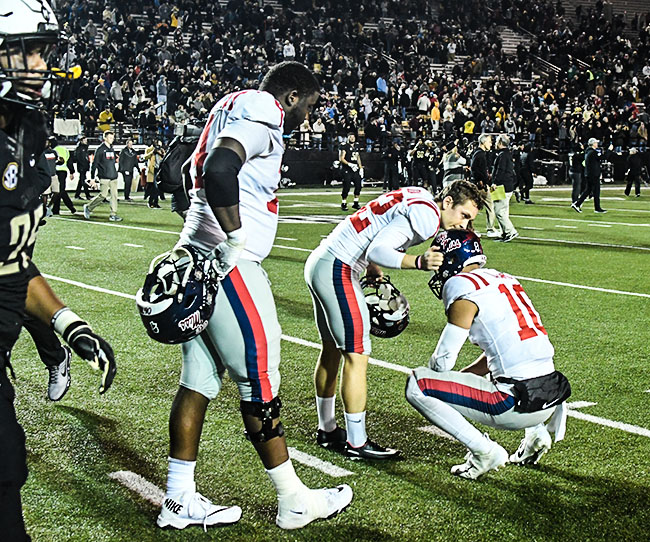 It hasn’t been the easiest or most positive year for Ole Miss football. Sitting at 5-6 and having one just one game in the SEC. The Rebels are riding a four-game losing streak into Thanksgiving’s Egg Bowl. Offensive coordinator Phil Longo called last week’s Vanderbilt loss “a game we definitely should have won.” At some point the Rebels are going to have to actually turn “should have won’s” into real victories in the record books.

That brings us to Thursday, a day when you’ll inevitably find yourself in front of a television, with your family, watching Ole Miss take on 18th ranked Mississippi State. At 7-4 with three SEC wins, the Bulldogs are a better team on paper right now than the Rebels. However, this is the Egg Bowl, a game where the silly cliché of “throw the record books out when these two play” is actually sort of true. Sometimes, clichés exist because there is some simple truth behind them. So here’s one more: there’s no love lost between these two teams.

In advance of tomorrow’s, Thanksgiving night Egg Bowl showdown, here’s some seemingly-intelligent (hopefully) talking points for when your crazy uncle tries to tell you Chad Kelly was the best Ole Miss quarterback of all-time.

1. The red zone woes have been atrocious for Ole Miss in SEC play.

We wrote about this extensively last week, but it’s going to be something that will continue to be harped on until it’s no longer an issue. Against Vanderbilt last week, the Rebels scored only one touchdown on seven trips to the red zone. That’s not going to win you many games against an FCS opponent, let alone in the SEC. Ole Miss may get Scottie Phillips back Thursday, which will help, but Mississippi State has one of the best defensive fronts in the nation.  Red zone efficiency must improve for the Rebels to have a shot Thursday.

2. While he’s not what you imagine in the traditional sense of the word ‘quarterback,’ Nick Fitzgerald is a very good football player.

Jordan Ta’amu has passed for over double what Nick Fitzgerald has on the season: 3,831 yards for Ta’amu to 1,504 for Fitzgerald. However, the Bulldog offense runs very differently from the Rebel one. While Phil Longo wants to spread the field and throw the ball 40 times a game, Mississippi State’s attack is ground oriented.

Nick Fitzgerald is not just the quarterback. He has over 90 more carries on the year than any Bulldog running back. He’s the Mississippi State leading rusher with 901 yards and 10 touchdowns this season and is the SEC all-time leading rusher from the quarterback position. It may not be pretty, but the Bulldogs are going to try to run the ball down Ole Miss’ throat Thursday. It will be up to the defense to string prior inconsistencies together for four quarters to stop the run.

3. Recruiting restrictions have severely hampered the depth of this team.

This 2019 recruiting class will be Matt Luke’s first with full recourses. For two years now, the team has been hampered by both self-imposed and NCAA upheld sanctions, ones that included scholarship reductions and other limits on recruiting such as prospect visits. For these reasons, Ole Miss has simply been at a disadvantage on the recruiting front for a handful of years now. Add that to mounting injuries on the season, and this team lacks a lot of depth necessary to compete for four quarters in SEC play. Recruiting and scholarship restrictions isn’t an excuse for a 1-6 start to SEC play, but it’s hard to say it’s not a factor.

4. At least you’re likely going to get to watch AJ Brown in the NFL for years to come.

Brown is highly regarded by NFL scouts and will likely be a first-round, if not top-15, pick in the upcoming NFL Draft, if the junior decides to declare. While he was one of the first Rebels to verbally announce his return following last year’s NCAA sanctions, it would be relatively surprising if he didn’t decide to turn pro following this season. The junior is Ole Miss’ all-time leading receiver. His positional versatility, having excelled from both the slot and outside this season, make him a valuable NFL commodity. Most teams will probably see him as a third, slot receiver, but in a pass-heavy NFL, slot receivers are essentially starters. Brown has the chance to have a very long NFL career.

5. Eli Manning belongs in the Hall of Fame.

Yes, Eli Manning has a career record of 114-110. Yes, he’s 6-19 in the past two seasons and 45-60 since the 2011 Super Bowl. Eli Manning is bad at playing football right now, but he hasn’t always been. When he eventually retires, Eli will be in the top seven in NFL history in passing yards, completions, and touchdowns.

Manning critics will say that the modern offensive explosion inflates Eli’s career numbers. Of the top eight in career passing yards, five are active NFL players (not counting Peyton Manning who recently retired). It’s a fair critique, but it’s not the point. The conversation comes down to how you define a Hall of Fame. To me, the purpose of the hall is to tell the history of football. You can’t tell the history of football without Eli Manning and the Giants beating the Patriots twice in the Super Bowl. Case closed. Send Eli to Canton.

“A bond like you won’t see anywhere else”: Egg…