Where does Ole Miss football go from here? 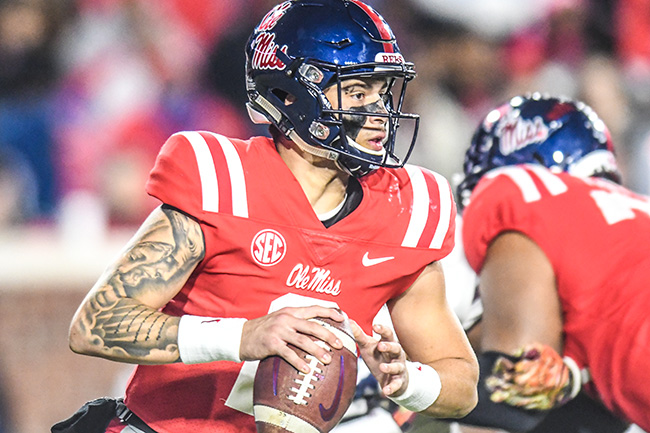 OXFORD – The 2018 season was one marred with regular disappointment for the Ole Miss football team. Finishing the season 5-7 with only one SEC win, the Rebels dropped five straight to end the season. Following the disaster season, there’s really nowhere to go but up. This all prompts the question, what’s next for Ole Miss?

Adding depth to a team hampered with recruiting restrictions and transferring players following the NCAA sanctions handed down last year was a point of emphasis for the coaching staff immediately following the Egg Bowl loss.

“I think (finishing) comes with numbers. That starts in recruiting and getting back to full strength. Getting guys back healthy,” said head coach Matt Luke. “That’s the best way to improve.”

The 2019 class will be Luke’s full season of unhampered recruiting. As of today, the team ranks eighth in the SEC and eighteenth nationally in recruiting, according to 247sports. There’s no longer any excuses for this staff. They have just over two months to get to work recruiting, leading up to the February 6 National Signing Day.

The staff said there’s not one, single position group of need. The goal for the recruiting season is to fill depth at every position on the roster. One name to keep an eye on, that should be at the top of Luke’s list, is Nakobe Dean. A five-star outside linebacker from Horn Lake, Dean is the top ranked recruit in the state. He was in Oxford for an unofficial visit during the Egg Bowl and will make an official visit to Ole Miss on December 1.

After Thursday’s Egg Bowl loss, Matt Luke said that he has to “evaluate every single thing you do from top to bottom.” That evaluation moved swiftly, as the team let go of defensive coordinator Wesley McGriff Friday morning. The team will likely move fast to hire a new coordinator, as recruiting defenders without knowing who will be leading them isn’t exactly an easy or logical task.

Two names in a potentially long list of candidates to keep an eye on are Tim Billings and Bryan Brown. Billings just finished his first season as the defensive coordinator at Southern Mississippi, after coaching linebackers the prior year. Southern Mississippi finished fifth nationally in yards allowed per game this season under Billings. Brown is another option with only one year of coordinator experience, but he played at Ole Miss from 2003-2006. His Appalachian State defense finished fourth nationally in yards per game this season.

Matt Corral got his first look at meaningful game time Thanksgiving night in the Egg Bowl. Jordan Ta’amu dislocated his finger carrying the ball in the first half and was unable to throw the ball effectively in the second, ushering in the Matt Corral era.

“Matt Corral is a competitor. That’s something that we know already, ya’ll are going to learn that here,” Longo said. “He fought and he did some good things. He’s an incredible talent and he knows the offense and I think as soon as those two things gel, he’s going to do a lot of good things here.”

Corral was up and down against Mississippi State, making some impressive plays, but overall not looking comfortable running the offense from the pocket. He finished the day 5 for 8 with 65 yards and one interception. Corral is, unquestionably the quarterback of the future, and in a lot of ways this coaching staff’s future hinges on his development. There’s no quarterback competition in Oxford this spring; everything centers around being able to get Corral up to speed and maximizing his talents.

It’s very likely that draft season will be more fruitful for the Ole Miss team than the actual regular season was. Greg Little, DaMarkus Lodge, Dawson Knox, A.J. Brown and D.K. Metcalf all rank in the top 100 prospects for the 2019 NFL Draft, according to The Draft Network’s Jon Ledyard. Other seniors, such as Jordan Ta’amu and Zedrick Woods, could be in the draft mix as well, come April.

Of the five in Ledyard’s top 100, only Lodge is a senior. The other four have choices to make as to whether or not take the leap to the NFL. Metcalf already made his decision, deciding less than 24-hours after the Egg Bowl loss to declare for the draft, but Brown, Little and Knox are still mulling that choice. Typically, if one is projected a first round pick, it’s unlikely for them to return to school, thus risking injury or down years.

In summation, there is optimism for Ole Miss moving into recruiting season. The sanctions have been lifted, and the team currently has a top-25 recruiting class and a young quarterback they believe in moving forward. But as Luke said following the Mississippi State game, “it’s time to get to work.”