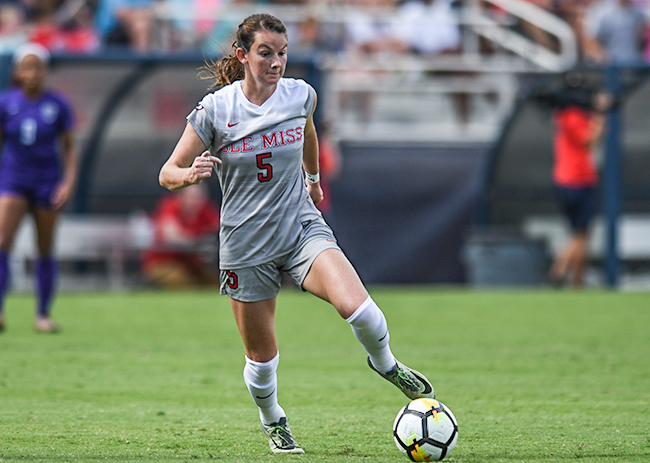 Following the end of a record-breaking career at Ole Miss, senior soccer player CeCe Kizer has been named the 2018 Senior CLASS Award winner in NCAA Division I women’s soccer.

“I am incredibly honored to have been selected for the Senior CLASS Award,” Kizer said. “It means so much to me that this award encompasses not only my athletic abilities but also my character as well as my efforts in the classroom and around the community.”

The Senior CLASS award is given to the most outstanding senior student-athlete in nine NCAA sports. The acronym CLASS stands for “Celebrating Loyalty and Achievement for Staying in School.” It is awarded to seniors who excel both as leaders in their respective sports and as leaders in their community. The NCAA states that recipients must have achieved excellence in the classroom, community, character and competition. Kizer is the first Ole Miss athlete in any sport to win the award.

“I’m thrilled for CeCe to receive this award,” said head coach Matt Mott. “She is the epitome of what being a student-athlete is all about. She’s obviously a fantastic athlete but also a great student, and she gives back to our community in so many different ways. We’re so proud of her and happy that’s she’s being recognized in this way. She’s been a great Rebel for the past four years and is certainly worthy of such a distinguished honor.”

In 2018, CeCe Kizer led the SEC in both goals and assists. In addition to being the Ole Miss all-time leading scorer, Kizer has been named, academically, to the Dean’s List each of her four years as a Rebel. She was a first-team United Soccer Coaches Scholar All-American in 2017. Kizer also volunteers with local parks and recreation programs, as well as serving as a mentor for a youth team in the Oxford area.

“Joining the list of athletes who have received this award in the past is extremely humbling. Soccer has given me so many amazing opportunities, and I’m proud of all my accomplishments not only on the field but off of it as well,” Kizer said. “Over my four years at the University of Mississippi I have grown so much as a player and person, and I owe it to the many people who have helped me succeed along the way.”

The award was established in 2001, inspired by Duke basketball player Shane Battier’s decision to forego the NBA and remain in school all four years. Past award winners include the likes of Breanna Stewart, Kirk Cousins and J.J. Redick, among others.