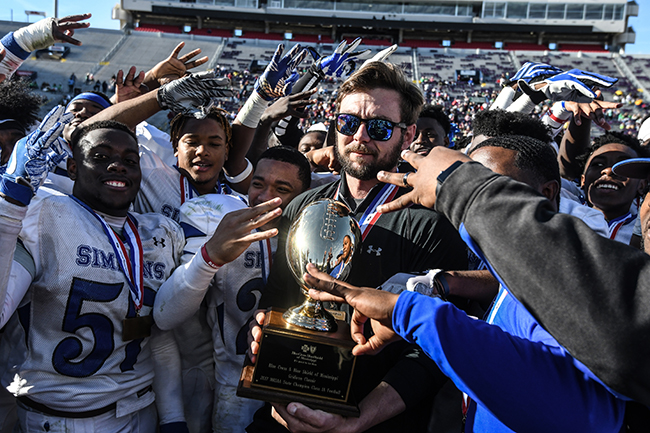 OXFORD — Friday begins the culmination of yet another high school football season in Mississippi. Southern Mississippi is playing host to the MHSAA football state championships at M.M. Roberts Stadium this weekend. Throughout the six matchups, teams are looking to solidify their reign over their respective classification while others are looking to return to the throne or take a seat in it for the first time.

Friday night will feature a team who is back in the state title for the first time in four years and a team who is getting their first shot at glory.

Oak Grove marched their way through the south half of the 6A bracket for their fourth state championship berth with wins over rival Petal in the second round and a big win over Brandon in the South Half championship last week. The Warriors lost to Brandon on Oct. 19 and did not lose the rest of the season.

Horn Lake dominated the north half of 6A with a perfect 7-0 record in Region 1-6A for their first region title in school history. There were a lot of firsts checked off by the Eagles this season, including their first North Half appearance and title.

Quarterback John Rhys Plumlee leads the Warriors’ offense. The senior does it all with a team-high 1,407 yards and 19 touchdown on the ground to go with 2,464 yards and 29 touchdowns through the air. The Horn Lake defense, led by Division I recruit Nakobe Dean, will look to slow down the Warriors’ potent offense, which could make it a low scoring game in the early going, but expect fireworks towards the later rounds of this 6A heavyweight title fight.

West Point has been the king of Class 5A for the past two years, taking over after Oxford’s run at three straight 5A state title appearances. The Green Wave is looking to add a third consecutive state championship to their trophy case and have done so without Marcus Murphy or Chris Calvert in their backfield.

There is a Cinderella awaiting them out of the South in West Jones and the Mustangs are hoping the clock does not strike midnight prematurely. Two weeks ago West Jones shocked the state with their win over heavy 5A favorite Hattiesburg then last week defeated Picayune to earn their first state title berth in program history.

It may not be a true David vs. Goliath scenario, but the Mustangs will have their work cut out for them if they want to supplant the two-time defending champions.

The state championship game is old hat for Louisville, who is making its ninth appearance, but first since 2013. The Wildcats have found nothing but success once they reach the final game of the season, with a perfect 8-0 in state title games. Ole Miss commit Ashanti Cistrunk solidified a stout Louisville defense at the linebacker position, helping them get back to their winning ways and another successful postseason run.

For Poplarville it is a return to the 4A title game and a shot at redemption. The Hornets reached their first state championship game in 2016, but were defeated by Lafayette. They managed to get past last season’s 4A runner-up East Central in last week’s South Half championship for a second chance at their first state title crown.

This is another match up of a stalwart team against another who has rarely seen a state championship game.

The Tartars of Taylorsville are in their second straight state championship game and 11th in program history. They are also looking to repeat as Class 2A championships and add an 11th trophy to their collection. Last season the Tartars defeated Winona41-26 in the state championship. Winona moved up to Class 3A this year and Scott Central will get their crack at their first state title since 1999.

The Rebels’ offense has their work cut out for them on Saturday. Taylorsville’s defense has held opponents to 9.2 points per game and only given up more than 20 points once in 15 games. Scott Central is averaging 34.2 points per game.

The longest winning streak in the country belongs to Simmons. The Blue Devils are 14-0 this season and have not lost a game in their last 54 tries. With that comes their attempt to win their fourth consecutive state championship. Winning is all the Blue Devils know, and changing head coaches three times in the past three seasons has not hindered this dynasty.

Nanih Waiya is all to familiar with the success of the Blue Devils. This is a rematch of last year’s Class 1A title game and the Warriors are a part of this historic run, albeit on the wrong side of history.

There is a chance for the Warrirors to be the 1 in 54-1 once the sun sets on Friday, but it will take a herculean effort to slow down a Simmons team who has not lost a game since 2014.