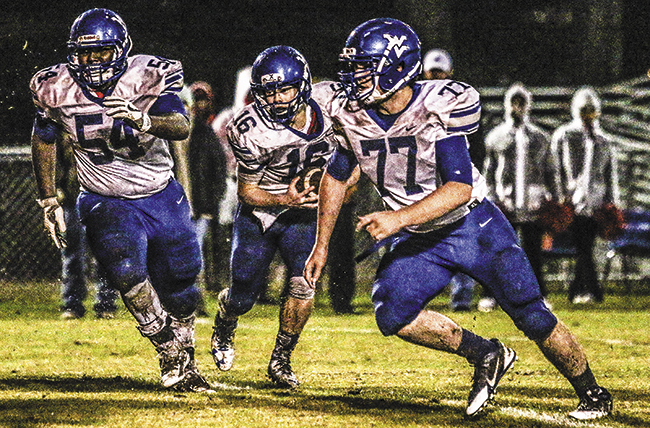 Water Valley's Jacob Truss (16) follows the blocking of teammates Kyjuan Hervey (54) and Chase King (77) against North Panola in the MHSAA Class 3A North Half Finals in Sardis, Miss. on Friday, November 23, 2018. (Keli Lindsey)

OXFORD — Friday is a day some in Water Valley may have felt would never come again, but in fact it did. For the first time since 1990 the Blue Devils find themselves playing for a football state championship.

Water Valley (13-2) takes on Seminary (12-3) in the MHSAA Class 3A state championship in the first game of the weekend at Southern Mississippi’s M.M. Roberts Stadium in Hattiesburg on Friday (11 a.m., 105.5 FM). It is not only the Blue Devils who are ending a lengthy drought between state title game appearances; Seminary has made it back to the championship for the first time since 2003.

The Bulldogs’ path to Hattiesburg included handing Winona their first lost of the season in a third round victory and then upending defending champion Jefferson Davis County in the South Half championship.

“We’ve got a good group of kids just like everybody up here,” Seminary head coach Brian Rials said at Monday’s state championship press conference. “We’ve struggled at different times this year. We’ve played a really tough non-division schedule and then of course (Region) 8-3A is one of the toughest in the state with Jefferson Davis in there every year. Just kids buying into it.”

All season the process has remained the same for the Blue Devils. The business-like approach did not change during what was the biggest week of practices of the season. The moment has never been too big for Water Valley through 15 games. Just one more big moment is between them and a second golden football in the trophy case.

“We’ve just been doing things the way that we have, the way that’s been successful,” Water Valley head coach Brad Embry said.

As has been the case all season, the Blue Devils have had to find ways to stifle some of the best players in the state. Friday will be no different with the task of both the offense and defense to slow down Seminary’s Nathan Pickering. The senior is a Mississippi State commit and plays both tight end and defensive end.

Pickering has 4 catches for 61 yards and three touchdowns and has 11 carries for 82 yards and 3 touchdowns. He’ had one completion on 5 attempts for 7 yards. On defense, Pickering has 89 tackles, a team-high 10 sacks, an interception and a fumble recovery.

“He does a little bit of everything,” Rials said of Pickering. “He’s been playing for me since seventh grade and when he was in junior high you knew you had a special athlete. You didn’t know he was going to be this good. We play him all over the field on offense, defense. Last year in the playoffs our kicker got hurt and he kicked for us. He’s never kicked in his life. He’s just a guy who can do a lot of different things and we’re going to try and take advantage of that.”

With the shortened week of playing a game on Friday morning, Water Valley left for Hattiesburg Thursday morning, making a pit stop to practice along the way in an attempt to keep the week as normal as possible.

The wave of support for the Blue Devils from the community has been noted by Embry as the strongest he’s ever seen it in his 11 years at Water Valley. Parades in the rain heading to the North Half championship is just an example of how the town has embraced this historic season. The support will continue with the school district canceling classes on Friday to allow students and fans to be at the game Friday morning.

“Administration has done everything we’ve asked to help us be successful and to see it pay off and the town get to celebrate this accomplishment and this opportunity with us I think is great,” Embry said. “I think it’s fun and that’s what it’s supposed to be. It’s high school sports, it’s community, it’s fun, it’s school spirit and I just think it’s a great thing. I’m really proud.”

For fans who will be in Hattiesburg early on Friday, there will be an ‘Eagle Walk’ for each team playing in the state championship games. Water Valley’s will take place at 9:15 a.m. as they walk into the stadium.