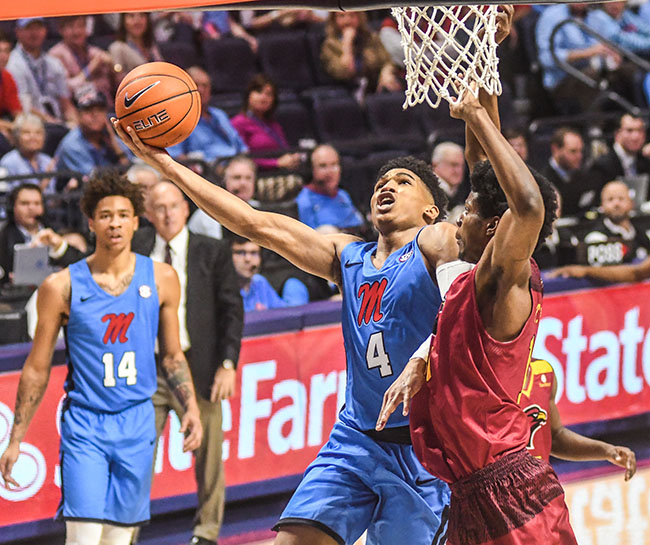 OXFORD – It can be hard, as an established veteran, to accept change. For junior guard Breein Tyree, this summer was nothing but that. Kermit Davis took over as head coach at Ole Miss in the spring and brought with him a whole new system and coaching staff. Soon after, Tyree was moved from point guard to shooting guard.

Some fight change. Some let change sink them. Tyree has adopted the change with open arms. Recently, Davis has praised Tyree for how much he has bought in, how he has developed in his new role, and how much he has emerged as a leader for the Rebel team.

“My life in college basketball isn’t going to be forever. Rather than start later, I figured I’d buy in now. What he really asks me is to be a vocal leader for the team and lead by example,” Tyree said.

From the moment he arrived in Oxford in 2016, Breein Tyree has been a contributor for the Rebels. He started 22 games as a true freshman and 23 games as a sophomore. However, the move to the two-guard spot, and the challenge to be a more vocal leader, has really helped the junior. Through seven games, Tyree has been Ole Miss’s leading scorer at 17.9 points per game and is shooting over 50-percent from the field.

“He’s our loudest voice in the gym. His leadership has gotten so much better the last seven or eight months,” Davis said. “He’s playing really well right now.”

The easy part for Tyree is that there’s not too much of a difference in Davis’ system between his former point guard slot, and the shooting guard position he plays now. In reality, it’s a team full of combo guards. Tyree is technically an ‘off-the-ball’ guard, but he still has the ball in his hands quite a bit, within the flow of the offense.

Tyree has been at his best this season when he’s working in the paint. No doubt, he’s a competent three-point shooter, but it’s not his strength. He’s shooting 33-percent on the season from three and leads the team in three-point attempts, but he’s at his best inside the stripe. Tyree is converting on 67.5-percent of his two-point attempts, a remarkable number for a 6-foot-2 guard.

“He’s found a good rhythm offensively, he’s got a great mid-range game,” Davis said. “He’s got to keep attacking, keep attacking, and get to the free throw line. His balance is getting a lot better.”

For Tyree to be leading the team in scoring wasn’t exactly expected, at least from an outside perspective. Senior guard Terence Davis was named pre-season second team All-SEC. He was expected to shoulder the bulk of the work, and to be fair, he is averaging 14.7 points per game. But Tyree has really come on the past two weeks, scoring a career high 28 points against Baylor and averaging 21 points per game over the last four. He’s not going to shy away from leading, both vocally and offensively.

“If it’s within coach’s offense and it’s a good shot, I’m most likely going to shoot it. As everybody knows, I like to shoot the ball,” Tyree said. “That’s part of just growing up… now it’s my time to step up.”