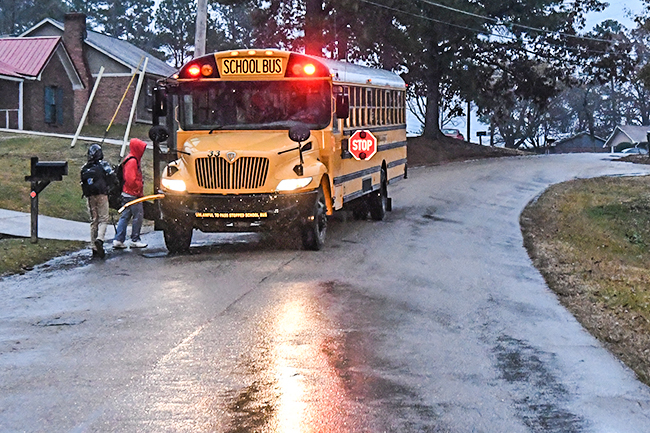 Oxford drivers have continued to violate bus safety laws and drive around stopped school buses, and now school parents are voicing their concerns.

According to Oxford School District Public Information Officer Heather Lenard, OSD recorded 33 instances of cars disregarding outstretched school bus stop signs while the buses were picking up and dropping off children in the month of November.

In the month of October, OSD recorded 32 instances of drivers disregarding bus laws.

Parents that live along those roads voiced their frustrations. Samantha Ball, a teacher that lives along Anderson Road, said she’s personally witnessed drivers go around stopped busses, which infuriates her as a parent who puts a child on these busses every morning.

“Some may not understand the laws fully or they’re just not aware that these are people’s children, lives that you’re putting in danger,” Ball said. “A lot of times, it’s kind of understandable, it’s you’re not a parent, you’re not a teacher or you’re not someone who works with children.

Ball said she’s had a cousin that was killed in Pontotoc due to a driver going around a school bus.

“They’re still seeking justice for that, when nothing has been done,” Ball said.

Ball said she wants to driver her daughter to school herself. However she works in Water Valley, which prevents her from driving her child to school in the morning. She has no other choice but to put her child at the mercy of drivers on the road.

“In order not to stress out or have a nervous breakdown, I have to push it to the back of my mind,” Ball said.

Ball called on better education for bus safety laws, specifically making bus safety a part of the University of Mississippi’s orientation program to teach students with cars about how many families live around the university.

Other news tips to the EAGLE have had residents and parents describe seeing busses drive around stopped busses and almost hit children. A tip to the EAGLE’s Facebook account described a car driving around a stopped bus on College Hill Road, and almost hitting her child.

The car didn’t stop, or even slow down.

Bus safety came back into the forefront in the Oxford community after a Nov. 1 incident where a 9-year-old Baldwyn boy was struck and killed by a driver while the boy was crossing a highway to board his school bus. The driver illegally drove around the stopped bus.

“We sincerely ask drivers to make good decisions when approaching school buses and school zones,” Lenard said. “Children can be unpredictable, so we all must remain vigilant and anticipate that they may go into a roadway or crosswalk when least expected. There are serious fines assessed for this offense, but most importantly, a child’s life is in danger.”

When busses stop, they outstretch an arm with a stop sign with flashing red lights attached to it. If a driver is caught driving around a school bus, they can face fine of up to $750 for a first a offense, and up to $1,500 and a suspended license for 90 days for a second offense.

“It’s a stop sign,” Ball said. “No matter what direction you’re coming from, you don’t go around it and you don’t try to rush on through.”