Oxford turning their season around amid winning streak 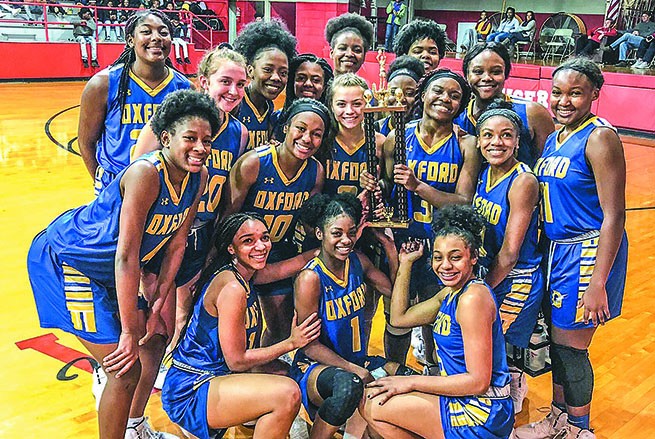 The Oxford High girls basketball team holds a trophy after winning the Winona Round Robin tournament at Winona.

OXFORD — Dating back to last season the Oxford High girls’ basketball team had loss 11 of their last 12 games, including going 0-2 in their region tournament to end their 2017-18 season. But things have taken a drastic turn. Since defeating DeSoto Central on Nov. 13, winning is the only thing the Lady Chargers have been able to do.

They are in the middle of a nine-game winning streak, their longest such streak since winning 17 games in a row during the 2015-16 season.

“We met (the day of the DeSoto Central game) and we said we had to start winning at sometime and you never knew what it could lead to,” Oxford head coach Cliff Ormon said. “Didn’t actually know it was going to lead to nine wins in a row, but very proud of the kids and the work they’ve put in. That was kind of one of those things where the win we got gave the kids a believe that they could do things we talked about in practice.”

Through their first 12 games, effort has not been a problem for Oxford (9-3). The issues was searching for consistency on the court and stringing four quarters together. During their three-game losing skid to open the season Oxford was scoring 46.6 points per game. Since then they have raised their offensive production slightly to 49.2 points per game.

The biggest reason for the Lady Chargers’ change in fortune has been due to their defense. In their first three games, opponents were scoring 54.3 points a game but during this winning streak Oxford has held opponents to 33.2 points a night.

“We’re still not where we want to be but I have seen the kids play with a determined effort,” Ormon said.

The current streak has also allowed Ormon to dust off their trophy case for a new addition. The Lady Chargers went 3-0 in this past weekend’s Winona Round Robin to win the tournament. Dominant wins over J.Z. George, Eupora and Winona helped them bring home the gold.

The average margin of victory in all three games was 35.3 points and in the game against Winona, Oxford outscored them 36-7 in the second half.

“We were able to come out in the second half and really kind of impose our will, defensively, on them,” Ormon said. “(Winning) has made it a lot easier for a lot of things. You can practice things and stress the little things now a little bit hard because they understand what it takes to win. …Anytime you keep score you want to win. The other thing was on Saturday it was the first time we’ve played for a trophy since the division (tournament). Anytime there’s a trophy you want to be able to bring it home.”