Reid settling into her role with Rebels 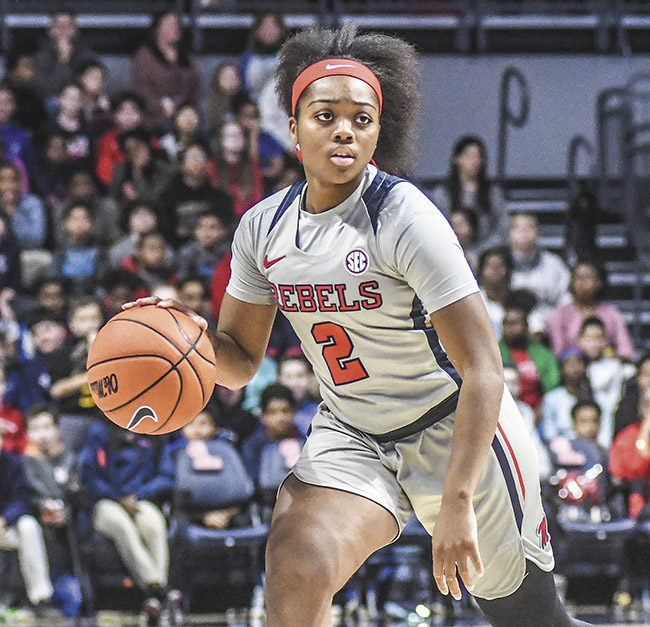 OXFORD — Last season was a difficult one to swallow for Mimi Reid. The Bronx native signed with Ole Miss as a four-star recruit and had expectations of contributing quickly in her career with the Rebels.

That was until a setback ended her freshman season before it even began. During preseason workouts Reid suffered an Achilles injury that kept her off the floor all of last season.

“It was very tough because a lot of athletes don’t sustain the injury that I did, especially being 17 and a freshman in college,” Reid said. “It was very tough but it was also a learning experience for me. Being able to sit back in the best conference in women’s basketball and see all these players play and traveling on the road. So, I almost got a feel for the game before I was able to step out on the court.”

During her rehab from the injury, Reid had a fork in the road moment along with the rest of her teammates. Following their elimination in the SEC Tournament Matt Insell was relieved of his duties as head coach. Nine players took the opportunity to transfer to other schools. Reid was one of the few who chose to stick it out and honor her decision.

“I was committed to here, from day one,” Reid said

A month later Yolette McPhee-McCuin was announced as the new head coach for the Lady Rebels. McCuin saw something in Reid and eyed her to be an important piece of her puzzle to rebuild a floundering program.

Reid is considered an extension of McCuin on the basketball court. Anything McCuin wants to be done during a game goes through Reid as a conduit. For a redshirt freshman who is 11 games into her collegiate career that could be viewed as a tough ask.

Reid is up to the challenge.

“It’s a tough job because coach Yo is somebody, she works hard and everything about her is very precise. There’s no letdown,” Reid said. “She has a high standard and I have to carry that on to the team. We’re out there playing, she’s not playing. So, just calling the plays I almost have to be a mind reader and I have to know what she’s thinking. I have to be a mini her and then them being able to relate in a positive way.”

There was another minor setback Reid had to endure this season, suffering a concussion after colliding with a bathroom door. It caused her to miss the TCU and Jacksonville State games. In her nine games played this year Reid is averaging 6.4 points, 5.5 assists and 4.7 rebounds per game. In her first two games back from concussion Reid has tallied a season-best 8 and 11 assists against Savannah State and Louisiana, respectively.

In the game against the Ragin’ Cajuns, Reid picked up her first career double-double with 14 points and 11 assists.

Getting to the point of playing consistently good basketball was a hurdle for Reid to overcome. Despite starting every game, there were times of self-doubt and still having the stigma of being a freshman. McCuin would have conversations with her point guard of basically motivational in nature.

“Definitely there has been times that I’ve doubted myself, but just that reminder (McCuin) gives me and her getting to know who I am as a person, that just uplifts me every game,” Reid said. “My teammates, they do a really good job of getting to know me as a point guard so they know my downs, they know my ups and they know what gets me going. As long as everything is running smoothing and I’m in a good mind frame we’re going to do really good.”