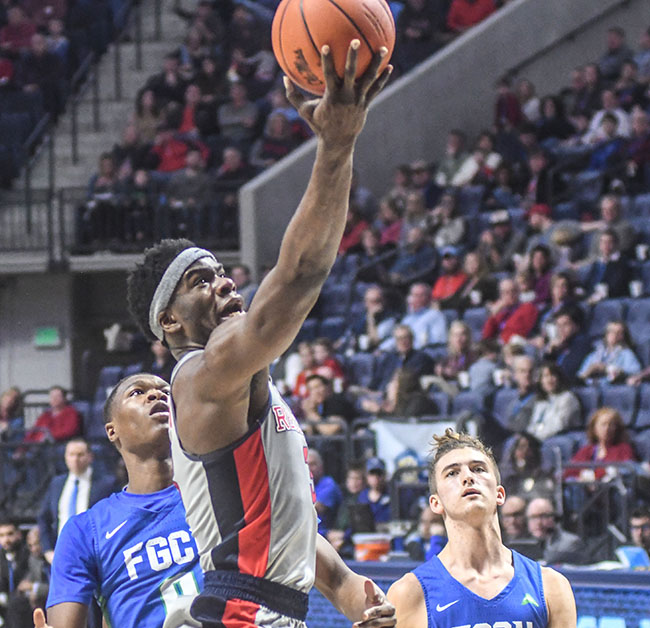 The ball-screen defense was bad. That defense led to breakdowns. Only then, after 12 games and a 7-5 record, were Rebels’ frontcourt players starting to prevent opposing guards from driving into the post.

Fast forward over a year later to last Saturday, when current basketball coach Kermit Davis was doing the opposite in almost every regard. He lauded his team’s defense after the Rebels beat Florida Gulf Coast Coast 87-57, and finished their non-conference slate 10-2.

“I thought we really took them out of some things early with our pressure,” Davis said. “Our one-three-one is really getting a lot better.”

This isn’t a worst-to-first turnaround by any means; Ole Miss still has to turn in a conference record better than the 5-13 record they owned last season.

But as the Rebels keep showcasing their improvement, and bracketologists take notice, the team is entering SEC conference play with the most excitement around Ole Miss men’s basketball possibly since the Marshall Henderson years.

A big reason why Ole Miss has created any buzz is because of its 10-2 record, which included going undefeated in the month of December. A feat Davis notes to be impressive because Ole Miss played six of its first 12 games away from home.

“For any team in college basketball to go undefeated in December, It’s hard to do,” Davis said. “Going into today’s game, we played more games away from home than the rest of the SEC.”

Playing away from home has also tasked Ole Miss with playing more disciplined basketball, which includes the aforementioned improved defense, as well as fouling less.

Comparing this team to last year’s at the end of non-conference play, the Rebels have cut their points allowed average by over just 10 points. Last season, Ole Miss allowed 76.6 points per game through 12 games. This year, the Rebels allow 66.1 through 12.

That defensive improvement is steadied by how Ole Miss has also improved at fouling less. Against Florida Gulf Coast, the Rebels committed nine first half fouls but adjusted to only foul four times in the second half.

This season, Ole Miss recorded 20 or more fouls in its first games of the season. In the Rebels last five games, they’ve only recorded 18 or less. Senior guard Terrance Davis said the team’s discipline stems from having better court awareness.

“If your guy’s got the ball, he’ll pass it, sometimes I’ll relax,” Terrance said. “I’ll catch myself relaxing. That’s how I picked up those two, three fouls in the first half.”

“Being disciplined, it’s what got us here.”

Furthermore, Ole Miss’ two losses came at the hands of Cincinnati and Butler, two perennial NCAA Tournament programs who beat the Rebels on a neutral court and in Indianapolis, respectively.

Still, the team knows it can’t look ahead to the NCAA Tournament when conference season is only beginning this week against Vanderbilt. Ole Miss is currently listed as a bubble team, and is projected to be one of the first four teams out of the NCAA Tournament, according to ESPN.

Terrance said the team just needs to play day-to-day and focus on the schedule at hand in order to make the tournament and that’s where discipline will be the most important. Kermit, however, knows the key to the team’s postseason dreams lies in SEC play.

“We’re trying to be built to win games on the road in the SEC,” Kermit said. “I know the teams are going to be really, really hard. There’s going to be some ups and downs in the league, that’s in any league you play in. I know our guys will have a great week, and we’ll look forward to Vandy.”