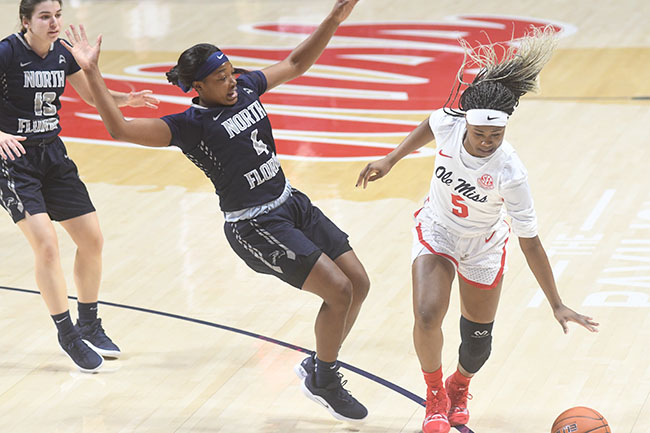 OXFORD – Ole Miss women’s basketball will enter 2019 on a high note, and coach Yolett McPhee-McCuin has notched career win number 100. Riding a two-game losing streak into Friday, the Rebels knocked off North Florida 82-69 in their last non-conference game of the year to advance to 6-8 on the season.

“When I showed up here there were two players that were eligible and healthy enough to play.” said McPhee-McCuin. “The six wins is, right now for me, a step in the right direction. Four of the eight losses could’ve gone either way. That being said I’m pleased.”

North Florida put up a good fight. Despite winning by 13, Ole Miss was never really able to pull away from the Ospreys. The Rebels led just 50-44 at the half. Both teams came down to earth from an offensive perspective in the second half. After the struggles to start, the Rebels limited North Florida to just 12 third quarter points and 25 in the half as a whole.

“I didn’t think that there was something we could do to fix (rebounding issues). It was all about heart and toughness,” said McPhee-McCuin. “We have to be able to hold our own on the glass. And that’s something that we still have to work on. It’s not fixed, by any means.”

Senior Crystal Allen has been, hands down, Ole Miss’ most dominant and consistent player all season. She’s the only Rebel to have started every game. Before Friday, Allen was averaging 17 points per game, a pretty significant improvement over her 11.7 points per game as a junior. Friday, Allen scored 20 points in the first half, before totaling 34 in the game, her career high. She also grabbed seven rebounds.

“She’s a young lady that came and trusted us from the beginning,” said McPhee-McCuin. “When she plays, the passion she plays with is because she’s not doing it for her. She’s doing it for her mom, her family, her siblings and this team. I’m very happy for her because she deserves everything that she’s getting.”

The win was Ole Miss’ last non-conference game of the season and their final game of 2018. They will open SEC play Jan. 3 on the road at Missouri.