A new look offense: What to expect from Matt Corral in the Rich Rodriguez system 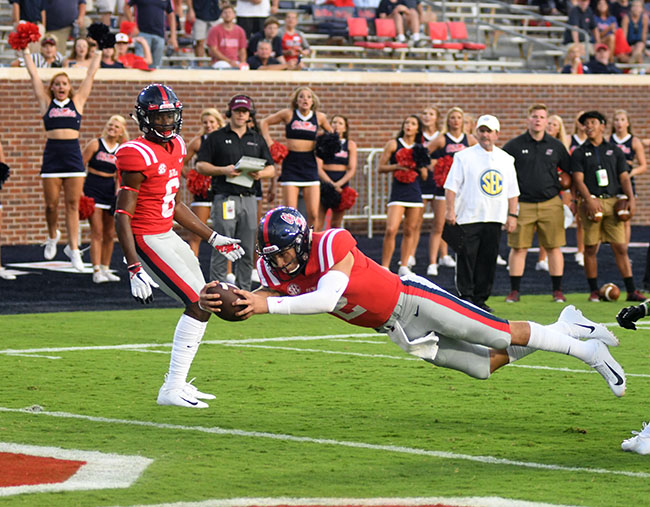 The last time Rich Rodriguez called plays on and NCAA sideline, his Arizona team was the no. 12 team in total offense in college football. That was 2017. Now the offensive coordinator at Ole Miss, Rodriguez will be taking over for Phil Longo, who’s Rebel team finished no. 9 in the country in total offense in 2018. Now much will change, right? Think again.

Rich Rod and Longo may both run systems who rack up gaudy yardage totals, but they go about in in completely different ways. If Longo was Peyton Manning, Rodriguez is Cam Newton. For Longo, everything was predicated on the passing game. In 2018, the Rebels were no. 5 in the country in passing yards per game and no. 72 in rushing yards per game. For the old Ole Miss, the pass was used to set up the run and the run was used to simply keep the defense honest. The new Ole Miss will be exactly the opposite.

Arizona in 2017 was a run-first team. They were no. 3 in the country in rushing at 309.3 yards per game and no. 101 nationally in passing. Remember those red-zone woes for the 2018 Rebels? They struggled under Longo at converting yards to points; while they were no. 9 in the country in yards, they were only no. 30 in points at 33.9 per game. The most recent Rich Rod team was no. 5 nationally in points, scoring 41.3 per game.

So, here is a quick look at the Rich Rodriquez offense through the years. That 4th column is where you should bring your attention. pic.twitter.com/ANenIyx4Sf

A large portion of the run game for Rich Rod comes from the quarterback position. Matt Corral will not merely be expected to sit back and sling the ball in 2019, he’s going to be a major part of the running game. When the quarterback is a threat to run, it removes a defender from the play. When one defender has to worry about the quarterback keeping the ball during every play, it creates a simple math problem for the offense. It’s one less person they have to block.

Over a decade ago, Rich Rodriguez’s offense was groundbreaking. He was one of the early pioneers of the offenses we see captivating college football today. In 2005, teams didn’t run the majority of plays from shotgun and spread the field the way they do now. At West Virginia in 2005, Rich Rod did.

The zone-read play, where a quarterback has the opportunity to hand the ball off or keep it himself, depending on what an unblocked edge defender does, is a big part of the offense. Again, it was a foreign concept over a decade ago, but now it has perpetrated every level of football. The play was a big reason for the development of three-star high school athlete Pat White into a two-time Heisman nominee at WVU, finishing sixth in 2007 and seventh in 2008.

In his four years as the starting quarterback at West Virginia under Rich Rod, White’s passing numbers were never all that impressive. Ole Miss quarterback Jordan Ta’amu threw for over 3,900 yards in 2018. Pat White never crested 2,000 in his time at WVU. However, what he did do was run. In 2007, Pat White passed ran the ball 197 times for 1335 yards and 14 touchdowns.

There will NEVER be another Pat White! pic.twitter.com/qskWK4Ngt4

This part of Rodriguez’s offense has never gone away, even as teams have adjusted to it. He struggled in his three years at Michigan but was reborn again recently in the desert. Rodriguez landed at Arizona in 2012 and would coach the team until 2017, accumulating a 43-35 record. At the end of his tenure, he had found another apprentice that very much resembled Pat White.

In 2017, Arizona quarterback Khalil Tate would post numbers that look strikingly similar to White’s one decade earlier. He threw for 1,591 yards and 14 touchdowns, rushing for 1,411 yards and 12 more scores. As previously noted, the team scored over 40 points per game. The system may put the quarterback in more harm’s way than many would like, but there’s no arguing this: the system works.

Khalil Tate — most electric player that no one is talking about.

All the talk of rushing quarterbacks brings us to 2019 and Ole Miss incumbent Matt Corral. The ideal look of the Ole Miss offense is to have a unit spread horizontally to limit defenders in the middle of the field, while having to account for multiple ball carriers on every play.

Corral far from the most athletic quarterback Rodriguez has coached. He certainly doesn’t have the burst of White or Tate or Denard Robinson (Rich Rod’s quarterback at Michigan), but he has shown the ability to run. He had a 61-yard rushing touchdown against Louisiana-Monroe but his recruiting pages list his 40-yard-dash time at just 4.80 seconds. However, what Matt Corral has is the luxury of being a much better passer than the three aforementioned quarterbacks.

Ultimately, it’s unlikely that Corral will carry the ball nearly 200 times, as Khalil Tate did in 2017. It’s simply not what he does best. However, Corral is more than capable of pulling the ball down on those zone-reads 5-10 times per game and being used as a ball-carrier in the red-zone. The zone-read plays don’t work because the quarterback keeps the ball every play; they work because he is a threatto keep the ball every play. Corral is more than athletic enough to be that threat.

Despite the exiting skill position talent, Ole Miss has enough returning talent at wide receiver in Elijah Moore and Braylon Sanders to be more prolific in the passing game than Rich Rod’s Arizona teams ever were. Pair that with a much more utilized Scottie Philips and impressive young back Isaiah Woulard and the Ole Miss offense has potential to be equally as explosive, and potentially more effective at scoring points, than it was in 2018.