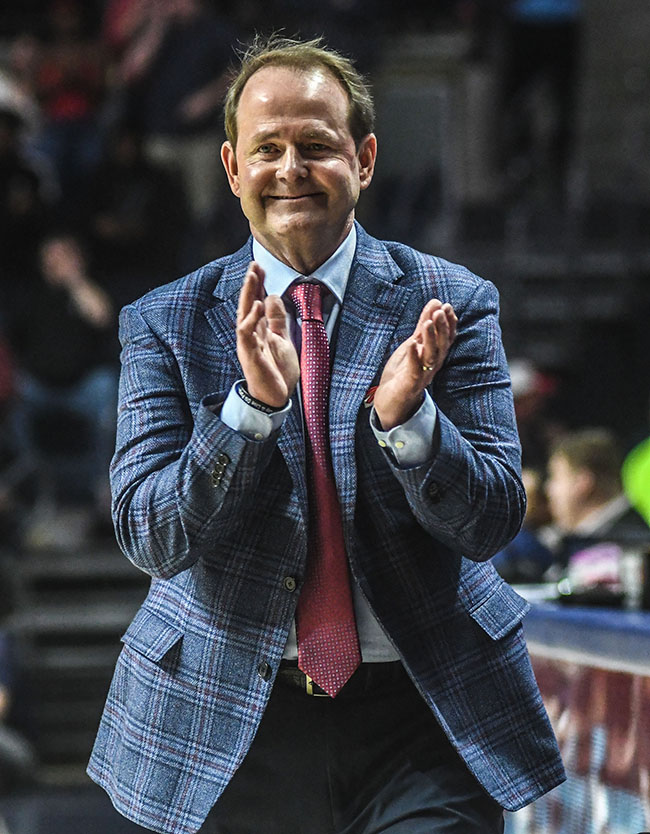 Ole Miss head coach Kermit Davis celebrates as time runs down on the clock against Auburn at the Pavilion at Ole Miss, in Oxford, Miss. on Wednesday, January 9, 2019. Mississippi won 82-67. (Bruce Newman, Oxford Eagle via AP)

OXFORD – Kermit Davis grew up in Starkville. His father, Kermit Davis Sr., coached Mississippi State for seven years. He played guard for the Bulldogs for two years and was a grad assistant there. Saturday, Davis will be returning to Humphrey Coliseum for the first time since he was an assistant at LSU, this time as the head coach of the Ole Miss Rebels.

“Everyone said, ‘where will your dad be in this game?’ I said, ‘guys have you had children before?’” Davis joked. “He loves his school but he’ll be pulling for his son.”

Saturday, the rivalry will be back on. Ole Miss will travel to Starkville to take on AP no. 14 Mississippi State, a game that means more for the state than it has in recent years. MSU is a nationally ranked team, coming off a befuddling loss. The Rebels are on the rise, having won nine straight including Wednesday’s upset of no. 11 Auburn at home.

“Rivalry games are great when both teams are good. They’re even better – it means more,” Davis said. “This one will mean more just because they’re nationally ranked and our team is trying to gain national respect. It’s a big game in the SEC.”

A second straight nationally televised game and the second straight against a team in the AP top-15, Saturday marks a big opportunity for Ole Miss. A road win and this team may be ranked going into next week. However, Saturday’s test comes not only against a good Bulldog team looking to revenge a loss, but in a very heated Starkville environment. The conclusion of this tough stretch will show a lot about who the 2019 Ole Miss Rebels truly are.

Mississippi State is coming off of a surprising overtime loss on Tuesday to open SEC play. Traveling to Columbia, S.C., the Bulldogs dropped their conference opener to South Carolina in overtime. The Gamecocks were the only SEC school that entered conference play with a losing record. In the loss, Mississippi State made just 13 of 23 free throws.

“I watched it a couple times. I think South Carolina is playing really well. It’s just the beauty of the SEC,” Davis said. “It was just one of those hard-fought games that could’ve gone either way.”

It’s a Bulldog team with three starters that can really shoot the ball, not even counting their leading scorer. Three MSU starters, Aric Holman, Nick Weatherspoon and Lamar Peters are all shooting over 40-percent from three. Additionally, senior guard Quinndary Weatherspoon, the Bulldogs leading scorer is averaging over 17 points-per-game. He shoots a respectable 34-percent from beyond the arc himself.

“Holman is one of the best stretch-fours in college basketball, not just our league,” Davis said. “He can shoot it. He may shoot as good as anyone in the country from his spot, from three. He’s got great range. When you start getting three guards like that and a stretch-four, now the floor is really spread.”

Despite the one game slip, the Bulldogs are still one of the top teams in the conference. They’ve played one of the strongest non-conference schedules in the SEC, with wins over Clemson and Cincinnati, making their loss to South Carolina even more befuddling.

“It’s just an athletic team.” Davis said. “I think they’ve got a really veteran team and a team that can win games in the NCAA Tournament.”

The game will cap a tough stretch for Ole Miss, after defeating no. 11 Auburn at home on Wednesday night. Saturday’s Mississippi State game will be an early one, a noon tip televised on CBS live from Starkville.