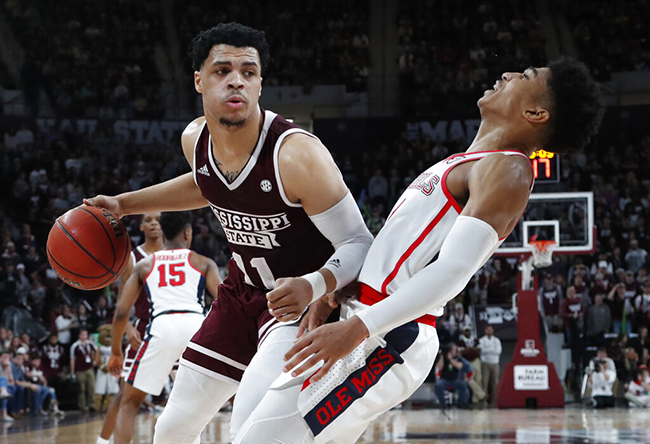 OXFORD – Going to the line, up one point, with just 8.8 seconds to play on Wednesday night, Breein Tyree sank both free throws, thus putting Ole Miss up three. Choosing not to foul, Ole Miss would surrender a game tying three to Florida’s KeVaughn Allen and lose in overtime. It was another gut-wrenching loss for the Rebels in what has been a tough stretch of late.

Wednesday’s loss was without doubt the most heartbreaking of any on the Rebels’ 14-6 record. In prior SEC losses to LSU and at Alabama, as well as the Big12-SEC game against Iowa State, the Rebels were never really close. They lost those three by an average of 16.3 points. Against Florida, they led the majority of the final ten minutes of play, including by 3 with under ten seconds to play.

The Rebels aren’t used to this sort of downward stretch. Just a week ago, Ole Miss was yet to lose consecutive games under Kermit Davis. Now, they’ve dropped three straight, and the road isn’t going to get any easier. Saturday afternoon, the Rebels will get their rivals for the second time. No. 22 Mississippi State is looking for revenge.

Mississippi State was the latest to fall victim to the impressive Alabama run, losing to the Tide by four points on Tuesday. A bigger loss than simply dropping one conference game to Alabama was Nick Weatherspoon. The sophomore guard left the game Tuesday following a nasty-looking knee injury on a dunk attempt. He would not return.

CBS Sports’ Jon Rothstein reported that an MRI on Weatherspoon’s knee came back revealing no structural damage. With the extent of the injury still unknown, it’s incredibly unlikely that he’ll take the Saturday in Oxford. The sophomore is averaging 10.1 points over 30.5 minutes per game for MSU, so there’s a large chunk of minutes for Ben Howland’s bench to fill in Nick Weatherspoon’s absence.

Ole Miss needed a career game from freshman Blake Hinson in the first meeting between the two schools to pull off the upset, winning 81-77 in Starkville. Hinson went 8 of 16 from the field and 5 of 11 from three in the first meeting, for a career high 26 points. However, he has struggled tremendously since. In the five games since the meeting in Starkville, Hinson is shooting just 28-percent and averaging just 5.6 points.

The Rebels defended the perimeter very well in the first matchup. They held State to 28.5-percent on three-point attempts, something they’ll need to do well again on Saturday. Howland played a very short bench in that game, playing only eight guys and giving only seven of them double digit minutes. Bench output, especially without Nick Weatherspoon, will be of a premium.

Like Ole Miss, the Bulldogs aren’t playing their best basketball right now. Mississippi State has lost of two of their last three; it’s almost a desperation game for both teams. Round two of the rivalry will be in Oxford, a significant advantage for the Rebel team that is 9-2 on the year at The Pavilion. Tip-off for the rivalry is set for 2:30 p.m. and will be televised on SEC Network.