Suitcases packed: a lot of road games ahead for Ole Miss softball 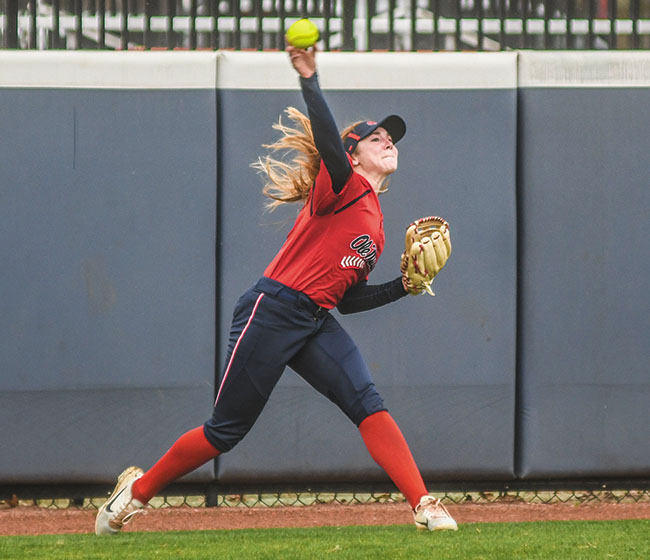 Ole Miss center fielder Kylan Becker throws the ball during softball practice in Oxford, Miss. on Tuesday, February 5, 2019. The Rebels open the season with five games at the Friends of Jaclyn Tournament, hosted by Central Florida. On Thursday Ole Miss plays UCF, on Friday and Sunday they play Ohio State, and on Saturday they play Minnesota and George Mason. (Bruce Newman, Oxford Eagle)

OXFORD – Ole Miss’ softball team kicks off the season tonight, a tournament on the road in Orlando, Florida. However, they will do so without suspended head coach Mike Smith, as reported yesterday. Smith will rejoin the team next weekend as they travel West to California. They’ll then spend the following weekend in Austin, Texas.

By the time the Rebels play their home opener in Oxford on Mar. 1, they will have played 17 games on the road. It’s something the coaching staff intentionally planned. Last year, the team scheduled a few home tournaments through month of February and many of the games got rained out. They wanted to avoid that for 2019.

“The weather is just so unpredictable here. You could schedule two tournaments in the first two weeks of the season and get them all in and get 10 games. Or you could schedule them and not get any games,” Smith said. “When you’re playing in the SEC, you better have some games under your belt before you get into SEC play. I just feel like we needed to go to some of those sunny places where we know we’d have an opportunity to play games.”

Of the list of issues presented by spending so much time away from Oxford, the academic angle is certainly at the forefront. We like to forget, but these are student athletes. Not only do they need to pass their classes, they need to maintain a certain grade point average to remain eligible. Smith said that most professors are good about missing class. However, it’s something that still has to be on the minds of the players while they’re gone.

“We do study hall on the road. It’s hard, but it’s fun,” said senior outfielder Kylan Becker. “You just have to enjoy the moments of being gone; you enjoy the traveling, enjoy the sightseeing. Enjoy everything and then you try to focus on school.”

Road trips inherently bring the girls closer, but it’s a formula that could also tear a team apart if they’re not careful. Team chemistry becomes critical when spending so much time together. From meals to airports, from bus rides to hotel rooms, the girls spend even more time together on the road then when they’re in Oxford.

Many of the girls emphasized how important this offseason was to develop those bonds with each other. It’s a team with a lot of young players, but also a handful of valuable upperclassman leaders. They’re ready for the challenge.

“This year’s focus was really on building relationships. We knew from the jump that was something we wanted to do. Whether it’s a breakfast night at the house or we go sing karaoke together – just different team activities,” said junior catcher Autumn Gilespie. “We’ve also made it a point to not be clicky this year. So anyone on the team feels comfortable talking to any one of their teammates. It’s a positive and uplifting atmosphere.”

The team is in Orlando this weekend, playing five games over a four day stretch. They played UCF tonight, and will play Ohio State twice, as well as Minnesota and George Mason. It’s a long and challenging road ahead for the ladies before they return home to play their first game in Oxford.