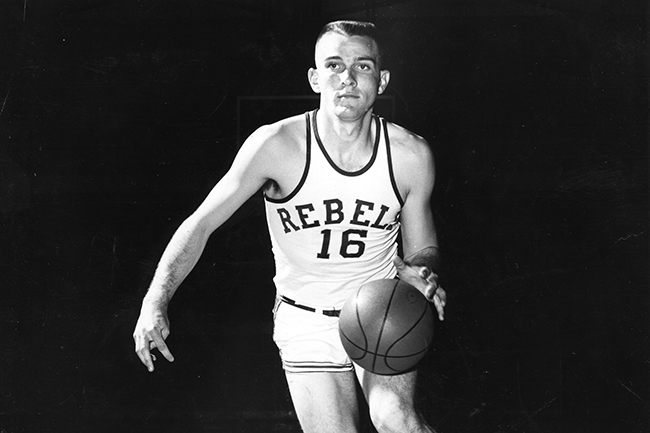 One of the greatest two-sport athletes in Rebel history, he was both an All-American in basketball and All-SEC as a pitcher during his time at Ole Miss in the mid-1950s.

At Ole Miss, the 6-foot-4 forward scored 1601 points in his Ole Miss career, including a 1957 season in which he was second in the country averaging over 30 points per game. The same season, he averaged 14 rebounds.

On the diamond for Ole Miss, he both pitched and hit a home run in the 1956 College World Series.

Despite being more accomplished as a basketball player while a Rebel and being drafted by the legendary Boston Celtics, Gibbon chose to play baseball professionally.

The lefty debuted with the Pittsburgh Pirates in 1960. As a rookie, he pitched during the World Series that year during the Pirates winning run. He would play professionally from 1960 until 1972 for the Pirates, Giants, Reds and Astros. In thirteen years as a pro, he would record a 3.52 ERA, appearing in over 400 games.

He was inducted to the Mississippi Sports Hall of Fame in 1979.

Visitation for Gibbon will be held at the Newton County Funeral Home-South in Newton on Sunday from 3-6 p.m. The service will be Monday, Feb. 25 at 11 a.m. in the same location.