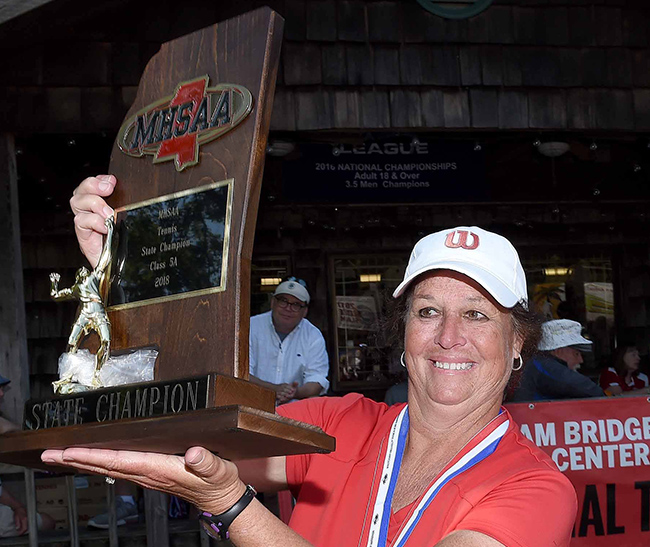 CHRIS TODD Lafayette High tennis coach Debbie Swindoll holds the trophy after the Commodores defeated Stone County 4-3 to win its first ever state tennis championship in the MHSAA Class 6A tennis championships at Parham Bridges Tennis Center in Jackson, Miss. on Monday, May 7, 2018.

Debbie Swindoll didn’t need an adjustment period. In just her first-year coaching 5A tennis, she led the Lafayette Commodores to their first 5A title as a school. Now, the Mississippi Association of Coaches has named her tennis coach of the year.

“I felt humbled and proud, really for the school. It’s really hard to win a state title. Even getting there is a tough feat,” Swindoll said. “It’s a huge honor.”

Lafayette jumped from a 4A school to a 5A school before the start of the 2017-18 season. In her seventh year as the Lafayette head coach, the team had never reached the state championship, let alone win. In 2018, they pulled off both with one swoop.

According to Swindoll, the award is taken with grace. She knows what a big honor it is, but she knows it comes with some added weight.

“For me, I’m working hard to try to repeat. It’s a great thing, but it’s also a little pressure for me to try to repeat,” Swindoll said.
“I’m trying to get there again or at least get to the championship again. But that’s on me; I don’t think the kids feel that.”

The MAC Coach of the Year award is one voted on by all the other coaches in the state of Mississippi. It’s not one award per class, it’s one per sport. The other finalists were Emillia Viljoen of St. Andrews Episcopal School and Brad Boteler of Madison Central.

“I’m more proud for this (award) because it was my fellow coaches that voted on it,” Swindoll said. “More respect because it’s people in the business that actually know what we do.”

This year’s Lafayette team sits at 6-3, playing one of the tougher non-conference schedules the Commodore program has faced to date. Swindoll will be presented with the award at the MAC Hall of Fame banquet in Jackson on June 21.